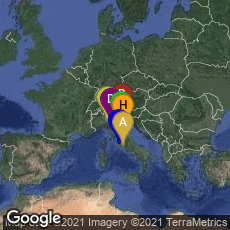 On May 6, 1527 an army of Spanish Catholics and Lutherans beholden to Holy Roman Emperor Charles V, and led by Charles III, [Duke of Bourbon] marched into Rome. For eight days these unpaid troops looted and pillaged the city, inflicting especially harsh treatment on priests, monks and nuns, forcing the Pope to flee the Vatican, and destroying art and smashing statuary. During the occupation of the city more than 2000 bodies were disposed of in the Tiber River, and another 10,000 were buried in Rome and its environs.

"In the meantime, [Pope] Clement remained a prisoner in Castel Sant'Angelo. Francesco Maria della Rovere and Michele Antonio of Saluzzo arrived with troops on 1 June in Monterosi, north of the city. Their cautious behaviour prevented them from obtaining an easy victory against the now totally undisciplined Imperial troops. On 6 June, Clement VII surrendered, and agreed to pay a ransom of 400,000 ducati in exchange for his life; conditions included the cession of Parma, Piacenza, Civitavecchia and Modena to the Holy Roman Empire (however, only the latter could be occupied in fact). At the same time Venice took advantage of his situation to capture Cervia and Ravenna, while Sigismondo Malatesta returned in Rimini.

"Emperor Charles V was greatly embarrassed and powerless to stop his troops, by the fact that they had struck decisively against Pope Clement VII and imprisoned him. Some may argue that Charles was partially responsible for the sack of Rome, because he expressed his desire for a private audience with Pope Clement VII and his men took action into their own hands. Clement VII was to spend the rest of his life trying to steer clear of conflict with Charles V, avoiding decisions that could displease him" (Wikipedia article on Sack of Rome (1527), accessed 02-03-2013).

Eventually, many of the invaders succumbed to the plague that swept through Rome in the summer of 1527; however, the occupation continued until February 1528.

More significantly, Charles V's invasion challenged the authority of the Catholic Church and marked a considerable advance for Protestantism. As Martin Luther wrote, "Christ reigns in such a way that the Emperor who persecutes Luther for the Pope is forced to destroy the Pope for Luther" (LW 49:169). In 1533, Clement had to make the delicate decision about whether to grant King Henry VIII of England an annulment of his marriage to Catherine of Aragon in a manner the Church could sanction. His decision was as significant for Protestant advancement as was the sack of Rome.

Keenly aware that Catherine was the aunt of Charles V, who had a decided interest in Henry's petition, Clement denied the request, which caused Henry to withdraw from the Roman Catholic Church. The Church soon excommunicated him, leading to the formation of the Protestant Church of England. Without the sack of Rome, and without Clement finding it necessary to consider how Charles V would react to his decision about the annulment, the pope might well have acceded to Henry's request, which would have had a profound effect on the course of European history.