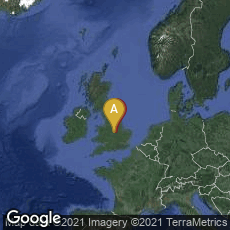 In August 1485 Richard III was killed at the Battle of Bosworth Field, 20 miles north of Leicester. Richard, who was characterized by Shakespeare as a hunchback, was perhaps the most reviled king in the history of England.

In the sixteenth century Tudor historian John Rouse identified Richard's burial place as a corner of the chapel in the Greyfriars priory in Leicester. However, during the Reformation the church was demolished and its exact location was eventually forgotten.

In 2012 Richard's bones were located when archaeologists from the University of Leicester used ground-penetrating radar on the site of the former priory and discovered that it was not underneath a 19th-century bank where it was presumed to be, but under a parking lot across the street. Excavation began in August, and the remains were located within days of the start of digging.

On February 4, 2013 archaeologist Richard Buckley of the University of Leicester reported that DNA testing confirmed that the bones were those of Richard III. Finding a DNA match among Richard's descendents after so many generations was extremely difficult.

"Despite this, a team of enthusiasts and historians traced the likely area - and, crucially, also found a 17th-generation descendant of Richard's sister with whose DNA they could compare any remains recovered.

"Genealogical research eventually led to a Canadian woman called Joy Ibsen. She died several years ago but her son, Michael, who now works in London, provided a sample.

"The researchers were fortunate as, while the DNA they were looking for was in all Joy Ibsen's offspring, it is only handed down through the female line and her only daughter has no children. The line was about to stop.

"But the University of Leicester's experts had other problems.

"Dr Turi King, project geneticist, said there had been concern DNA in the bones would be too degraded: "The question was could we get a sample of DNA to work with, and I am extremely pleased to tell you that we could."

"She added: "There is a DNA match between the maternal DNA of the descendants of the family of Richard III and the skeletal remains we found at the Greyfriars dig" (http://www.bbc.co.uk/news/uk-england-leicestershire-21063882, accessed 02-04-2013).

The bones showed signs of severe scholiosis, which would account for Richard's hunched-over appearance. Although around 5ft 8in tall (1.7m), the condition meant King Richard III would have stood significantly shorter, and his right shoulder may have been higher than the left. The skeleton had suffered 10 injuries, including eight to the skull, and other "humiliation" wounds. The individual had unusually slender, almost feminine, build for a man - in keeping with contemporaneous accounts. Radiocarbon dating reveals that the individual had a high protein diet - including significant amounts of seafood - meaning he was likely to be of high status.

The decision was made to rebury Richard III's remains in Leicester's Anglican cathedral, which is about 100 yards from where Richard's remains were found.