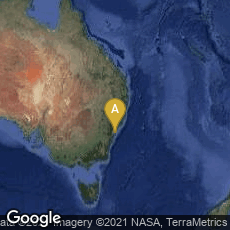 In 1813 Australian natural history artist and naturalist John William Lewin issued Birds of New South Wales from Sydney. J W Lewin was the first free settler professional artist and engraver in Australia. He was also one of the first artists not to use English painting conventions when depicting Australia. He was the son of William Lewin, the author of The Birds of Great Britain with Their Eggs, Accurately Figured.

Prior to issuing his 1813 book Lewin had published in England a treatise on entomology entitled Prodromus Entomology. Natural History of Lepidopterous Insects of New South Wales, collected, engraved and faithfully painted after nature.(1805), and in 1808 a book on Australian birds entitled Birds of New Holland, which described a selection of birds that he had shot. The texts of these books were edited by Lewin's brother John with the help of eminent scientists, and printed in England. Of the 1808 book only six copies are recorded: those of George III and five English subscribers. However, in Sydney, Lewin had sold subscriptions for fifty-five copies of this book, but none ever reached Sydney, the edition presumably having been lost at sea.

In 1822 Lewin's widow, having returned to England, issued a revised second edition of Lewin's Birds of New Holland. In 1833 the third edition of Lewin's work appeared, using some sheets of text printed in 1822, on paper watermarked Whatman 1821, and some sheets printed in 1838 on paper watermarked Whatman 1838. Both the second and third editions incorporated restrikes of Lewin's original plates.  For the 1838 edition, the plates were colored from specimens lent by John Gould, and the nomenclature was overseen by Thomas Campbell Eyton. There are two issues of the third edition.