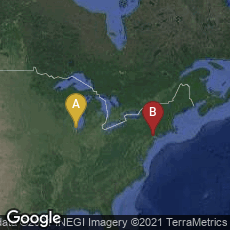 The First Known Motion Picture with Live-Recorded Sound: Invention of the Kinetophone In 1894 or 1895 inventor William K. L. Dickson, working for Thomas Edison, made The Dickson Experimental Sound Film at Edison's Black Maria movie production studio in West Orange, New Jersey. This was the first known film with live-recorded sound.  It also appears to be the first motion picture made for the Edison-Dickson Kinetophone, the first sound film system.

The version below from the Library of Congress does not include the sound track:

"Reports suggest that in July 1893, a Kinetoscope accompanied by a cylinder phonograph had been presented at the Chicago World's Fair. The first known movie made as a test of the Kinetophone was shot at Edison's New Jersey studio in late 1894 or early 1895; now referred to as the Dickson Experimental Sound Film, it is the only surviving movie with live-recorded sound made for the Kinetophone. In March 1895, Edison offered the device for sale; involving no technological innovations, it was a Kinetoscope whose modified cabinet included an accompanying cylinder phonograph. Kinetoscope owners were also offered kits with which to retrofit their equipment. The first Kinetophone exhibitions appear to have taken place in April. Though a Library of Congress educational website states, 'The picture and sound were made somewhat synchronous by connecting the two with a belt,' this is incorrect. As historian David Robinson describes, 'The Kinetophone...made no attempt at synchronization. The viewer listened through tubes to a phonograph concealed in the cabinet and performing approximately appropriate music or other sound.' Historian Douglas Gomery concurs, '[Edison] did not try to synchronize sound and image.' Leading production sound mixer Mark Ulano writes, '[O]nly 45 Kinetophones were made. They did NOT play synchronously other than the phonograph turned on when viewing and off when stopped.' Though the surviving Dickson test involves live-recorded sound, certainly most, and probably all, of the films marketed for the Kinetophone were shot as silents, predominantly march or dance subjects; exhibitors could then choose from a variety of musical cylinders offering a rhythmic match. For example, three different cylinders with orchestral performances were proposed as accompaniments for Carmencita: "Valse Santiago", "La Paloma", and "Alma-Danza Spagnola" (Wikipedia article on Kineophone, accessed 02-15-2013).