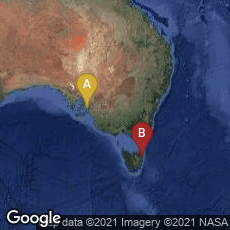 In 1858 Specimens of the Fancy Borders, Types, etc., etc., Belonging to the Proprietors of the "Register" and "Observer" General and Fancy Printing Office was issued by the "Register" General Printing Office in Adelaide, Australia. This octavo pamphlet consisted of a blank at each end and 62 leaves printed on rectos including the title. Its title and four pages were printed in color with silver or gold on three of those pages. Until a copy appeared on the Australian antiquarian book market in February 2013 this publication appears to have been unrecorded.

This annotation appeared on the website of Australian rare book dealer Richard Neylon, of St. Mary's, Tasmania, who offered the copy for sale for $12,500 Australian on February 20, 2013:

"Nineteenth century Australian printer's catalogues or specimen books are, by decree, rare. Australian printers jammed their newspaper advertisements with as many faces as they could hold and pretty much left it at that. Degotardi's 1861 Art of Printing, the first Australian book on printing - more an advertisement and specimen book than manual, though it is a specimen book of printing processes rather than types - has always been a lonely book in Australian bibliography. There is a pretty long gap in the records until the next entries in which the printing trade displays its wares. Until we're well into the seventies there survives a handful of single sheets and scraps, nothing else until this book popped up. And this doesn't fill a gap, it pushes the line further back, predating as it does Degotardi by three years. Are these Australian types? Many of the cuts, maybe some of the ornaments are undoubtedly local but it's no big deal to cut a wood block or engrave a small plate. Odd as it may sound I'm not sure it's important. As far as we're able to figure out Australian typefounding had pretty much peaked by 1860. The first nationalistic boast of local types was in 1843 with the claim that the Government Gazette was now using type founded by Alexander Thompson of Sydney - Thompson shipped his type, seemingly all small, utilitarian, sizes to Melbourne, Hobart and Adelaide in the 1850s - and Degotardi boasted using local type in his book but doesn't tell us whose. The type books that survive from the seventies and eighties all lay claim to the quality of imported types and it would seem that great influx of population, trade and imports following the gold rush suffocated any nascent local manufacture. The smallest type in this book is a bit rough - usually a prompt for spotting colonial manufacture - but whether it's worn imported or worn local type I leave to the experts to decide. What is curious to me is that the passages of smaller type in these specimens haven't been proof read properly. I spotted a couple of sloppy mistakes without looking hard. So, is it the first Australian type book? Quite probably. We are in gold rush Australia with affluent merchants and tradesmen oozing out from the up-till-now flea-bitten society of feudal grandees and underclass and a flood of imports - including type and ornaments from England and America - and with those imports came the trade catalogues of manufacturers and merchants. A trade catalogue is not just a feature length advertisement, it has added ambition and pretension; it carries a message of assurance, of substance, permanence even. As a species trade catalogues barely exist before the 1860s in Australia. Take out auction catalogues and we are left with a few seed merchant lists and a pitiful clutch of flyers, nothing much else. How could a canny printer help but spot a market deserving a jump start? And what better way to inspire than to produce their own elaborate and ambitious catalogue? It didn't work. Degotardi's work, under the guise of instruction, maybe had a different impulse but even allowing for the poor survival rate of such things we still only have nothing much like another real trade catalogue of any sort until the late 1860's when Prince, Ogg & Co of Sydney issued a modest but undeniably illustrated and bound catalogue of their wares. So now I'm doubling the claim made for this slender book: not only is it the earliest Australian printer's type book, it's close to being the earliest true trade catalogue we have."