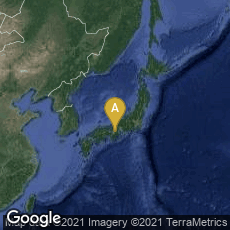 The First State Libraries are Founded in Japan "It is in the eighth century that we have the first firm evidence [in Japan] of collections of books maintained by the state, by religious institutions and by private individuals. The lawcodes promulgated in 702 established the first state library, the Zushoryo, which was supervised by a government ministry [in Nara] and was largely modelled on the Bi shu sheng of Tang China. It was responsible for collecting and conserving both Buddhist and Confucian books and, unlike the Bi shu sheng, was required to complile official histories. For these purposes it had a staff of 4 papermakers, 10 brushmakers, 4 inkmakers and 20 copyists, for collecting was partly dependent on the copying of texts held elsewhere. It consumed huge quantities of paper, drawn by the tenth century from 42 of the 66 provinces, and appears to have become increasingly absorbed in sutra-copying. The statutes contained in the Engishiki include a number of regulations relating to the  Zushoryo, such as a requirement that the books be aired regularly, which shows that it also functioned as a repository of books. Precisely what books is unclear, although a ruling in 728 refers to both secular and Buddhist works as well as screens and paintings, and by 757 the Zushoryo had its own catalogue. The same source stipulates that permission was needed if somebody wished to borrow more than one item at a time, but doubtless the right to borrow was restricted. In 833 some of the buildings were burnt down and in 1027 its treasures were destroyed by fire. It may have been revived as there is a record of another fire in 1042, but it then disappears from the record until the Meiji government established a new Zushoryo in 1884" (Peter Kornicki, The Book in Japan: A Cultural History from the Beginnings to the Nineteenth Century [2001] 365).