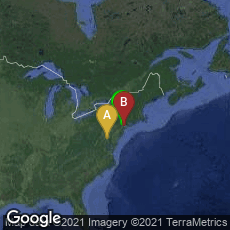 On April 7, 1927 newspaper reporters and dignitaries gathered at the AT&T Bell Telephone Laboratories auditorium in New York City to see the first American demonstration of television. The live picture and voice of Secretary of Commerce (later President) Herbert Hoover were transmitted over telephone lines from Washington, D.C., to New York.

“Today we have, in a sense, the transmission of sight for the first time in the world’s history,” Hoover said. “Human genius has now destroyed the impediment of distance in a new respect, and in a manner hitherto unknown.”

A second telecast followed that day, via radio transmission from Whippany, N.J. The telecasts demonstrated television’s potential as an adjunct to telephone service and as a medium for entertainment.

The live demonstration of television at Bell Labs was filmed, and in September 2020 that short movie was viewable on Facebook at this link:

In April 1930 Bell Labs issued a pamphlet entitled Two-Way Television and a Pictorial Account of its Background, documenting the technology involved and the historic demonstration, plus some later developments.  An unusual dust jacket added to the 40-page illustrated pamphlet dramatized the new technology.