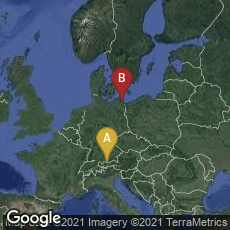 In 1945, after the end of World War II, the Research and Intelligence Branch of the U. S. Army Forces in the Branch European Theatre issued a secret report entitled The story of Peenemünde or what might have been [cover title; title-page reads “Peenemünde east, through the eyes of 500 detained at Garmisch”]. After the classification was reduced from "Secret" to "Restricted" they issued a few copies of this 749-page collection of reports reproduced from typescript. The report included numerous halftone reproductions of photographs, and diagrams. The punched sheets were held together by metal clips. The front wrapper was illustrated with an aerial photograph of Peenemünde.

Compiled by the U. S. Army between May and September 1945, describing rocketry research conducted by the Nazi regime between 1937 and 1945 at Peenemünde East, this document marks the first account published outside of Nazi Germany of the rocketry program conducted at Peenemünde East. The Story of Peenemünde is also the first document to record the transfer of German rocketry technology to the United States as part of what came to be known as Operation Paperclip, which culminated in the development of America’s space program, and advanced missile weapons systems, and helped transform the United States into a global superpower. Many historians have stated that had the United States not essentially smuggled the Rocket Team into the U.S., the United States might have fallen behind drastically in the post war arms race.

The document consists of 118 separate reports, including transcripts of the U.S. Army’s original interrogations of key German rocket scientists at Garmisch, Germany, and heavily illustrated plans of various advanced rocket designs, guidance systems, etc., which only appeared in print in this form. The quality of typescript and printing varies considerably throughout, indicating a rushed, relatively non-professional production. When we checked in February 2013 OCLC cited seven copies of The Story of Peenemünde in libraries, five of which were U.S. government institutions (Naval Postgraduate School, U.S. Air Force Academy, Smithsonian Institution, Combined Arms Res. Library, U. S. Army Heritage and Education Center); the remaining two were the University of Illinois and the University of Alabama at Huntsville, the city close to the Redstone Arsenal where the Wernher von Braun and the Nazi Rocket Team were eventually based in the U. S.

In the final years of World War II the Peenemünde East facility developed the V-2 rocket, the world’s first long-range supersonic combat-ballistic missile. Under the guidance of Wernher von Braun, head of Peenemünde’s scientific and engineering team, the Peenemünde rocketry group also worked on several other pioneering designs including the Wasserfall surface-to-air antiaircraft missile and the A-9 intercontinental ballistic missile, both of which were still under development at the war’s end (the Nazis planned to use the A-9 to attack the United States). The Nazi rocketry program was at least a generation more advanced than anything developed by the Allied Forces, and when the American military learned of it in 1943 they immediately started a project to study the V-2 and to capture the people who had designed it.

As for the Peenemünde team, when it became clear that the Allies would defeat Germany, General Dornberger and Wernher von Braun “decided it would be best to seek out the Americans, particularly as they wanted to continue working on rockets after the war. It looked as though the Red Army would reach Peenemünde first. Surrendering to the Soviets was never an option, and they knew that the British and French could not afford a major post-war rocket program. They concluded their best opportunity to continue building large rockets would be in America” (Kennedy, p. 25).

On May 2, 1945 the Peenemünde group surrendered to the American 44th Infantry division. Shortly afterwards the Americans seized about 100 V-2 rockets, which were eventually shipped to the proving ground in White Sands, New Mexico to form the basis of America’s new rocketry program; they also captured the entire Peenemünde archive of scientific and engineering documents (totaling nearly 14 tons), and drew up a list of key German rocket personnel to be found and interrogated. This was the start of the American intelligence project that became famous under the name of Operation Paperclip, which was responsible for bringing von Braun, Dornberger and over one hundred other German rocketry experts to the United States. The Story of Peenemünde dates from the very beginning of this operation, when captured German rocket scientists were still being held and interrogated at the U.S. military garrison at Garmisch-Partenkirchen in Bavaria. Among the 118 separate documents, mostly in English but with a few in German, are:

• Interrogations conducted by U.S. Army Intelligence of key Nazi scientific and engineering personnel, including Walter Dornberger (director of Peenemünde East), and Wernher von Braun, both of whom played critical roles in the creation of the U.S. rocketry and space programs

• Illustrated plans for the Wasserfall surface-to-air antiaircraft missile and the A-9 intercontinental ballistic missile, taken from the Peenemünde archives

• Description of the Peenemünde wind tunnel—then the largest supersonic wind tunnel in the world—and wind tunnel experiments along with other documents crucial to the establishment of America’s postwar rocketry and space programs. The separately printed mimeographed index indicates that these materials were brought to Washington by “Colonel McCoy”; i.e. Col. Howard McCoy, head of the Air Documents Research Center, which was responsible for translating, cataloguing and indexing captured German documents.