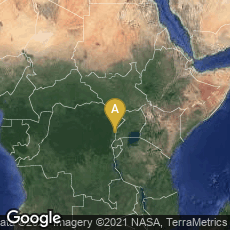 A: Ishango, Nord-Kivu, Democratic Republic of the Congo

The Ishango Bone, Possibly One of the Oldest Calendars The Ishango Bone, a notched talley stick discovered at Ishango in the Congo (Zaire) in 1960 by Jean de Heinzelin de Braucourt, and now preserved in the Royal Belgian Institute of Natural Sciences, is one of the oldest known objects that may contain logical or mathematical carvings. It may be simply a talley stick.

Alexander Marschak, an independent scholar, argued that it represents a six-month lunar calendar. In 1970 Marshack published his innovative Notation dans les gravures du Paléolithique Supérieur. He argued that talley marks on certain bones represented a system of proto-writing, and proposed the controversial theory that notches and lines carved on certain Upper Paleolithic bone plaques were notation systems, specifically lunar calendars notating the passage of time. Using microscopic analysis, Marshack showed that seemingly random or meaningless notches on bone were sometimes interpretable as structured series of numbers. Marshack expanded upon these ideas in his book, The Roots of Civilization (1972). If Marshack's interpretation is correct, notched bones such as these may be, in the words of John Eccles, the earliest "conceptual performance of homo sapiens." Alternatively they may be a yet to be understood method of recording information, or something else.

Other supposed "lunar calendars" from about the same date have been discovered on ojbects such as the Isturitz Baton, the Blanchard bone, and possibly in cave paintings in Lascaux and elsewhere.

Eccles, Evolution of the Brain: Creation of the Self (1989) reproducing the Blanchard bone on the cover; discussion on 135-36.