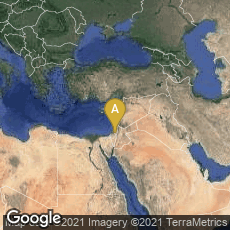 Found in one of the Ain Sakhri caves near Bethlehem, and preserved in the British Museum, the Ain Sakri lovers figurine, carved from a calcite cobble, is the oldest known representation of two people engaged in sexual intercourse.

"The natural shape of a calcite cobble has been used to represent the outline of two figures in coitus. Their heads, arms and legs appear as raised areas around which the surface has been picked away. The figures have no faces. The arms of one hug the shoulders of the other and its knees are bent up underneath those of the slightly smaller figure.

"This figurine was found by a Bedouin and sold to the French Fathers at Bethlehem . It was then acquired by the French consul and prehistorian René Neuville who attributed it to the cave of Ain Sakhri where he excavated and found Natufian material. Although the source area of the figurine is not in doubt, its association with Ain Sakhri is unproven. This image of a couple making love is also phallic in all aspects. Although unique in showing a couple, simple phallic carvings are known from other Natufian sites. These have been associated with fertility rites but the arguments have tended to be simplistic" (The British Museum Collection online, accessed 06-02-2013).