The Family Tree - Neanderthals and Denisovans were closely related. DNA comparisons suggest that our ancestors diverged from theirs some 500,000 years ago. (Click on image to view larger.)

A Tale of Three Humans

A third kind of human, called Denisovans, seems to have coexisted in Asia with Neanderthals and early modern humans. The latter two are known from abundant fossils and artifacts. Denisovans are defined so far only by the DNA from one bone chip and two teeth—but it reveals a new twist to the human story. 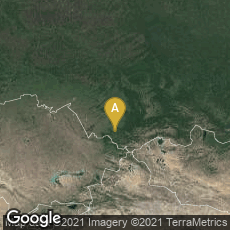 The Denisova Hominin, a Third Kind of Human

Molar found in Denisova Cave of the Altay Mountains in Southern Siberia. (Click on image to view larger.)

On March 24, 2010 scientists announced the discovery of a finger bone fragment of an eight year old girl who lived about 41,000 years ago, found in the remote Denisova Cave in the Altai Mountains in Siberia, a cave which was also inhabited by Neanderthals and modern humans. Discovery of two teeth and a toe bone belonging to different members of the same population were later reported.These three objects are the only specimens from which the Denisova hominins are known. The average annual temperature of Denisova Cave remains at 0°C (32°F), a factor which contributed to the preservation of archaic DNA among the diverse prehistoric remains discovered, in addition to the Denisova hominin remains.

Using a new technique for sequencing ancient DNA from bone, in August 2012 scientists from the Max Planck Institute reconstructed the genome of the Denisova hominins and announced that they were a new species, that they interbred with our species, and that the DNA results suggest that they had dark hari, eyes, and skin.

"Analysis of the mtDNA of the finger bone showed it to be genetically distinct from the mtDNAs of Neanderthals and modern humans [Katsnelson 2010]. However, subsequent study of the genome from this specimen suggests this group shares a common origin with Neanderthals. They ranged from Siberia to Southeast Asia, and they lived among and interbred with the ancestors of some present-day modern humans, with up to 6% of the DNA of Melanesians and Australian Aboriginies deriving from Denisovans.

"It was in 2008 when Russian archaeologists discovered the finger bone fragment, and nick-named it 'X Woman'. Artifacts, including a bracelet, excavated in the cave at the same level were carbon dated to approximately 40,000 BP.

"A team of scientists led by Johannes Krause and Svante Paabo from the Max Planck Institute in Germany sequenced mtDNA from the fragment. The analysis indicated that modern humans, Neanderthals and the Denisova hominin last shared a common ancestor around 1 million years ago [Katsnelson 2004].

"The mtDNA analysis further suggested this new hominin species was the result of an early migration out of Africa, distinct from the later out-of-Africa migrations associated with Neanderthals and modern humans. Some argue it may be a relic of the earlier African exodus of Homo erectus, because of the tooth size, although this has not been proved. The conclusions of both the excavations and the sequencing are still debatable because the evidence shows that the Denisova Cave has been occupied by all three human forms" (http://www.bradshawfoundation.com/origins/denisova_hominin.php, accessed 07-07-2013).

For images and a very readable account of these discoveries see "The Case of the Missing Ancestor," nationalgeographic.com, July, 2013.