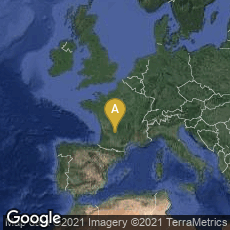 Neanderthals Made the First Specialized Bone Tools in Europe

A bone tool known as a lissoir, possibly used to prepare animal skins. Image courtesy of the Abri Peyrony and Pech de l'Azé I Projects. (Click on image to view larger.)

In August 2013 archaeologist Marie Soressi from Leiden University and colleagues published a paper describing the oldest specialized bone tools found in Europe, from the Pech-de-l'Azé I excavation site in southwestern France in 2005 and a nearby site called Abri Peyrony (Haut de Combe-Capelle). Notably these tools were created by Neanderthals (Neandertals) before modern humans are thought to have arrived in Europe (circa 42,000-38,000 BCE).

"Modern humans replaced Neandertals ∼40,000 y ago. Close to the time of replacement, Neandertals show behaviors similar to those of the modern humans arriving into Europe, including the use of specialized bone tools, body ornaments, and small blades. It is highly debated whether these modern behaviors developed before or as a result of contact with modern humans. Here we report the identification of a type of specialized bone tool, lissoir, previously only associated with modern humans. The microwear preserved on one of these lissoir is consistent with the use of lissoir in modern times to obtain supple, lustrous, and more impermeable hides. These tools are from a Neandertal context proceeding the replacement period and are the oldest specialized bone tools in Europe. As such, they are either a demonstration of independent invention by Neandertals or an indication that modern humans started influencing European Neandertals much earlier than previously believed. Because these finds clearly predate the oldest known age for the use of similar objects in Europe by anatomically modern humans, they could also be evidence for cultural diffusion from Neandertals to modern humans" (http://www.pnas.org/content/early/2013/08/08/1302730110, accessed 08-14-2013).