The bones of an early member of our species, Homo sapiens, known as Omo I, excavated from Ethiopia's Kibish rock formation. The bones are kept in the National Museum of Ethiopia. When the first bones from Omo I were found in 1967, they were thought to be 130,000 years old. Later, 160,000-year-old bones of our species were found elsewhere. Now, a new study by scientists from the University of Utah and elsewhere determined that Omo I lived about 195,000 years ago -- the oldest known bones of the human species. (Credit: John Fleagle, Stony Brook University) (Click on image to view larger.)

Location of Omo Valley in Ethiopia, Africa. (Click on image to view larger.) 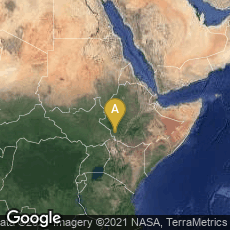 Scull from the River Omo. (Click on image to view larger.)

Between 1967 and 1974 a scientific team from the Kenya National Museums directed by Richard Leakey and others discovered a collection of hominid bones at the Omo Kibish sites near the Omo River, in Omo National Park in south-western Eithiopia.  These fossil bones, which include two partial skulls as well as arm, leg, foot and pelvis bones, are known as the Omo remains. In 2013, when I wrote this entry, these were the oldest fossil remains of anatomically modern humans, or anatomically modern Homo sapiens—individuals with the range of phenotypes of modern humans.

"In 2004, the geologic layers around the fossils were dated, and the authors of the dating study concluded that the 'preferred estimate of the age of the Kibish hominids is 195 ± 5 ka [thousand years ago]", which would make the fossils the oldest known Homo sapiens remains. In a 2005 article on the Omo remains, Nature magazine said that, because of the fossils' age, Ethiopia is the current choice for the 'cradle of Homo sapiens' " (Wikipedia article on Omo remains, accessed 08-21-2013).