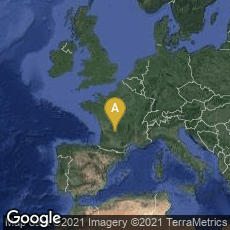 Lascaux: the "Sistine Chapel" of the Upper Paleolithic

Painting of a dun horse from Lascaux Cave. (Click on image to view larger.)

On September 12, 1940 four teenagers, Marcel Ravidat, Jacques Marsal, Georges Agnel, and Simon Coencas—together with Marcel's dog Robot, discovered the Lascaux cave complex near the village of Montignac in Dordogne, France. A few days later the boys told M. Laval, a retired schoolmaster, and Maurice Thaon, a young acquaintance of Abbé Henri Breuil, of their discovery. Thaon made a few preliminary sketches of the cave art and brought them to Breuil, the leading authority on paleolithic or cave art.

Breuil arrived at Lascaux on September 21 and spent three days exploring the caves. In "La grotte de Lascaux. Rapport", published in the Bulletin de la Société historique et archéologique du Périgord later in 1940 Breuil announced the discovery and provided the first description of the Lascaux cave paintings. Illuatrations in the brief seven-page paper included reproductions of some of Thaon’s sketches.

"The cave contains nearly 2,000 figures, which can be grouped into three main categories: animals, human figures and abstract signs. The paintings contain no images of the surrounding landscape or the vegetation of the time. Most of the major images have been painted onto the walls using mineral pigments, although some designs have also been incised into the stone. Many images are too faint to discern, and others have deteriorated entirely.

"Over 900 can be identified as animals, and 605 of these have been precisely identified. Out of these images, there are 364 paintings of equines as well as 90 paintings of stags. Also represented are cattle and bison, each representing 4 to 5% of the images. A smattering of other images include seven felines, a bird, a bear, a rhinoceros, and a human. There are no images of reindeer, even though that was the principal source of food for the artists. Geometric images have also been found on the walls.

"The most famous section of the cave is The Great Hall of the Bulls where bulls, equines, and stags are depicted. The four black bulls, or aurochs, are the dominant figures among the 36 animals represented here. One of the bulls is 17 feet (5.2 m) long, the largest animal discovered so far in cave art. Additionally, the bulls appear to be in motion. A painting referred to as "The Crossed Bison", found in the chamber called the Nave, is often submitted as an example of the skill of the Paleolithic cave painters. The crossed hind legs create the illusion that one bison is closer to us than the other. This visual depth in the scene demonstrates a primitive form of perspective which was particularly advanced for the time" (Wikipedia article on Lascaux, accessed 08-21-2013).

Remarkably, near the village of Eyzies-de-Tayac Sireuil there are 37 decorated caves and shelters, as well as an even greater number of habitation sites from the Upper Paleolithic, located in the open, in a rock shelter, or at the entrance to one of the karst cavities. This is the highest concentration in western Europe. Lascaux is located some distance from the major concentrations of decorated caves and inhabited sites, most of which were discovered further downstream.