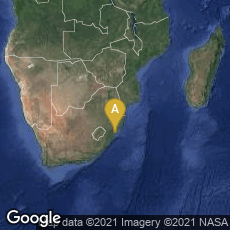 From Sibudu Cave, Probably the Earliest Sewing Needle, Made of Bone In 2008 Lucinda Backwell, Francesco d'Errico, and Lyn Wadley discovered bone implements in Middle Stone Age (MSA) deposits at Sibudu Cave, South Africa, confirming the existence of a bone tool industry for the Howiesons Poort (HP) technocomplex, circa 63,000 BCE to circa 57,000 BCE. The bone tools included two points, one of which is consistent with sewing needles, and the end of a polished spatula-shaped piece of the type used to work leather. When I wrote this entry in 2013 the sewing needle found at Sibudu Cave was the earliest known.

"The first form of sewing was probably tying together animal skins using thorns and sharpened rocks as needles,[5] with animal sinew or plant material as thread.[6] The early limitation was the ability to produce a small enough hole in a needle matrix, such as a bone sliver, not to damage the material. Traces of this survive in the use of awls to make eyelet holes in fabric by separating rather than cutting the threads. A point that might be from a bone needle dates to 61,000 years ago and was discovered in Sibudu Cave, South Africa.[7] A needle made from bird bone and attributed to archaic humans, the Denisovans, estimated to be around 50,000 years-old, and was found in Denisova Cave.[8] A bone needle, dated to the Aurignacian age (47000 to 41,000 years ago), was discovered in Potok Cave (Slovene: Potočka zijalka) in the Eastern Karavanke, Slovenia.[9] Bone and ivory needles found in the Xiaogushan prehistoric site in Liaoning province date between 30,000 and 23,000 years old.[10] Ivory needles were also found dated to 30,000 years ago at the Kostenki site in Russia[11] "(Wikipedia article on Sewing needle, accessed 8-2020).