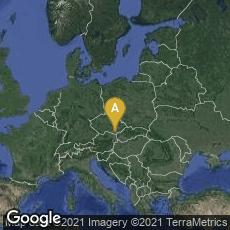 The Earliest Portrait of "a Real Living Woman"

The oldest known portrait of a woman, sculpted from mammoth ivory during the last ice age around 26,000 years ago.  Photograph: Graeme Robertson for The Guardian. (Click on image to view larger.)

Smaller than a human thumb, an image of a woman's head delicately carved in mammoth ivory about 24,000 BCE is considered the earliest portrait of an individual. The portrait, found found in the Czech Republic at Dolní Věstonice, Moravia, shows a woman with her hair drawn up on the top of her head, with a fringe across her brow. Or possibly the woman is wearing a fur hat. Though earlier images of people survive, this is viewed as the first actual portrait of an individual because of the distinctiveness of the features depicted. When the portrait was exhibited at the British Museum in 2013 the curator Jill Cook said,

"The reason we say it is a portrait is because she has absolutely individual characteristics. She has one beautifully engraved eye; on the other, the lid comes over and there's just a slit. Perhaps she had a stroke, or a palsy, or was injured in some way. In any case, she had a dodgy eye. And she has a little dimple in her chin: this is an image of a real, living woman" (http://www.theguardian.com/science/2013/jan/24/ice-age-art-british-museum, accessed 09-02-2013).

The portrait is preserved in the Anthropos Institute at the Moravian Museum.