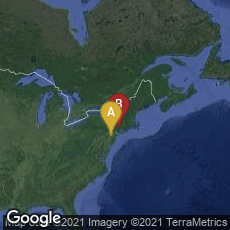 In 1961 the first industrial robot, Unimate, created by American inventor George Devol, was in operation on a General Motors assembly line at the Inland Fisher Guide Plant in Ewing Township, New Jersey. The 4000 pound robotic arm transported die castings from an assembly line and welded these parts on auto bodies, a dangerous task for workers, who could be poisoned by exhaust gas or lose a limb if they were not careful.

Unimate was based on Devol's 1954 patent specification on Programmed Article Transfer that introduced the concept of "Universal Automation" or Unimation. For this patent there were no prior citations; U.S. Patent 2,988,237 was granted in 1961. In his patent application Devol wrote, "the present invention makes available for the first time a more or less general purpose machine that has universal application to a vast diversity of applications where cyclic digital control is desired."  The robot was built by Unimation, the world's first robot manufacturing company, founded in 1956 by Devol and Joseph Engelberger in Danbury, Connecticut.

"The first Unimate prototypes were controlled by vacuum tubes used as digital switches though later versions used transistors. Further, the "off-the-shelf" parts available in the late 1950s, such as digital encoders, were not adequate for the Unimate's purpose, and as a result, with Devol's guidance and a team of skilled engineers, Unimation designed and machined practically every part in the first Unimates. They also invented a variety of new technologies, including a unique rotating drum memory system with data parity controls.

"In 1960, Devol personally sold the first Unimate robot, which was shipped in 1961 from Danbury, Connecticut to General Motors. . . . In 1966, after many years of market surveys and field tests, full scale production began in Connecticut. Unimation's first production robot was a materials handling robot and was soon followed by robots for welding and other applications. In 1975, Unimation showed its first profit" (Wikipedia article on George Devol, accessed 09-17-2013).