Original ad for the Kenbak-1 in Scientific American 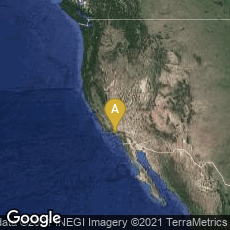 In 1970 John Blankenbaker of Kenback Corporation, Northridge, California, designed and produced the Kenbak-1.  The machines, of which only forty were ever built, were designed as educational tools and offered for sale in Scientific American and Computerworld for $750 in 1971.  The company folded in 1973.

Unlike many earlier machines and calculating engines, the Kenbak-1 was a true stored-program computer that offered 256 bytes of memory, a wide variety of operations and a speed equivalent to nearly 1MHz. It was thus the first stored-program personal computer.

"Since the Kenbak-1 was invented before the first microprocessor, the machine didn't have a one-chip CPU but instead was based purely on discrete TTL chips. The 8-bit machine offered 256 bytes of memory (=1/4096 megabyte). The instruction cycle time was 1 microsecond (equivalent to an instruction clock speed of 1 MHz), but actual execution speed averaged below 1000 instructions per second due to architectural constraints such as slow access to serial memory.

"To use the machine, one had to program it with a series of buttons and switches, using pure machine code. Output consisted of a series of lights" (Wikipedia article on Kenbak-1, accessed 09-19-2013).

In 2013 John Blankenbaker's detailed account of the design, production, and operation of the Kenbak-1 was available from his website, www.kenbak.-1.net.

Also in 2013, "Official Kenbak-1 Reproduction Kits" were available from www.kenbakkit.com.