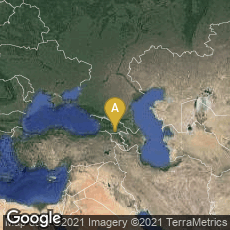 The 1.8-million-year-old skull found during a dig in the Republic of Georgia.

On October 17, 2013 David Lordkipanidze, paleontologist and director of the Georgian National Museum in Tiblisi reported the results of eight years study of a 1.8 million-year-old skull, known as Skull 5, discovered at Dmanisi, a site in the republic of Georgia. At the time of discovery, this skull of an adult man was the earliest completely preserved adult hominid skull. It has a surprisingly primitive, protruding upper jaw, and a tiny braincase. Combined with four other skulls found earlier at Dmanisi, it suggests that ancient people from the same time and place could look quite different from each other. For this reason, and because the Dmanisi hominids are so similar to the African hominids of the period, Lordkipanidze and his co-authors theorized that fossils from both continents represent a single species.

"The site of Dmanisi, Georgia, has yielded an impressive sample of hominid cranial and postcranial remains, documenting the presence of Homo outside Africa around 1.8 million years ago. Here we report on a new cranium from Dmanisi (D4500) that, together with its mandible (D2600), represents the world's first completely preserved adult hominid skull from the early Pleistocene. D4500/D2600 combines a small braincase (546 cubic centimeters) with a large prognathic face and exhibits close morphological affinities with the earliest known Homo fossils from Africa. The Dmanisi sample, which now comprises five crania, provides direct evidence for wide morphological variation within and among early Homo paleodemes. This implies the existence of a single evolving lineage of early Homo, with phylogeographic continuity across continents" (Abstract in Science.)