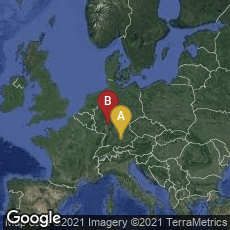 A: Augsburg-Innenstadt, Augsburg, Bayern, Germany, B: Innenstadt I, Frankfurt am Main, Hessen, Germany Portrait of Georg Willer published in 1725.

In 1554 Georg Willer, a bookseller in Augsburg, issued the first catalogue of the Frankfurt Book Fair. This was the first comprehensive book catalogue issued in Germany. The quarto pamphlet of 10 leaves listed 256 books under the title of Novorum Librorum quos Nundinae Atumnales, Francoforti Anno 1564 celebratae, Venales Exhibuerent.

"The catalogues of the Frankfurt Book Fair, initiated by the Augsburg bookseller George Willer in 1564, represent the first international bibliographies of a periodic character, attempting to list every six months all new publications issued in Europe, and they can be considered the prototype of today's Books in Print. The books are arranged by subject; for the first time, place, publisher, and date are always mentioned" (Breslauer & Folter, Bibliography: Its History and Development [1984] no. 24).

“The fair catalogue was a co-operative effort: the printers coming to the fair sent in advance title-pages of the books they were bringing, so that Willer could arrange them in subject order before printing his catalogue” (Pollard & Ehrmann, The Distribution of Books by Catalogue [1965], 74-77.)

Breslauer and Folter noted that in 1984 there was no copy of the first edition of Willer's catalogue in the United States.