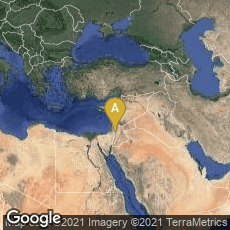 Analysis of pollen grains taken from sediment beneath the Sea of Galilee pinpointed the period of crisis in climate that led to the collapse of civilization in the Late Bronze Age.

In the October 2013 issue of Tel Aviv: Journal of the Institute of Archaeology of Tel Aviv University palynologist (pollen researcher) Dafna Langgut and archaeologist Israel Finkelstein published "Climate and the Late Bronze Collapse: New Evidence from the Southern Levant." Using cores drilled from the Dead Sea, the researchers were able to study pollen counts an intervals of 40 years--the highest resolution yet in the region. From this evidence they were able to demonstate that a devastating drought from 1250 to 1100 BCE caused the collapse of civilization in the Southern Levant during the Late Bronze Age.

"A core drilled from the Sea of Galilee was subjected to high resolution pollen analysis for the Bronze and Iron Ages. The detailed pollen diagram (sample/~40 yrs) was used to reconstruct past climate changes and human impact on the vegetation of the Mediterranean zone of the southern Levant. The chronological framework is based on radiocarbon dating of short-lived terrestrial organic material. The results indicate that the driest event throughout the Bronze and Iron Ages occurred ~1250–1100 BCE—at the end of the Late Bronze Age. This arid phase was identified based on a significant decrease in Mediterranean tree values, denoting a reduction in precipitation and the shrinkage of the Mediterranean forest/maquis. The Late Bronze dry event was followed by dramatic recovery in the Iron I, evident in the increased percentages of both Mediterranean trees and cultivated olive trees.