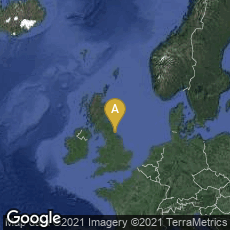 The Hetton Colliery Railway, the First Railway that Uses No Animal Power In 1820 British engineer George Stephenson was hired to build an 8- mile (13-km) private railway for the Hetton Coal Company at Hetton Lyons, County Durham, England. Beginning in 1822 the Hetton colliery railway ran from Hetton Collliery, about two miles south of Houghton-le-Spring to a staithe (wharf) on the River Wear. To power the railway Stephenson used a combination of gravity on downward inclines and steam locomotives for level and upward stretches. This was the first railway that used no animal power.  When it finally closed in 1959 the Hetton colliery railway was the oldest mineral railway in Great Britain.