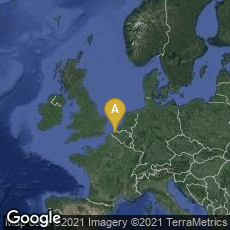 The Rothschild Prayerbook is Illuminated by Several Leading Miniaturists The Rothschild Prayerbook, a Flemish manuscript book of hours, was illuminated from about 1500 to 1520 by several leading miniaturists in the final flowering of the Ghent-Bruges school of manuscript illumination roughly 50 years after the introduction of printing by movable type. Most of the sixty-seven large miniatures are by the "Master of the First Prayerbook of Maximilian" (probably Alexander Bening, (father of Simon) and Gerard Horenbout or the so-called Master of James IV of Scotland (possibly two names for the same artist). Other miniatures in the manuscript are by Gerard David, who was also a panel painter, or by a pupil working in his style. There are also two miniatures by Simon Bening, and work by other masters.

The early history of the manuscript is obscure, a feature shared by several important manuscripts of the late Ghent-Bruges school, which typically do not contain heraldry and portraits of their original owners. Elements in the book, such as extra mass texts and prayers beyond those usually found in books of hours, relate it to the Chartreuse des Dunes, near Bruges. By 1500 printed books of hours had, for the most part, replaced illuminated manuscripts, with the exception of luxury illuminated books like this, which were generally restricted to the higher nobility and royalty.  In the 16th century the manuscript belonged to the princely Wittelsbach family century, and then to the library of the counts palatine in Heidelberg. It left Heidelberg before 1623, after which its history is unknown until it resurfaced in the collection of the Viennese branch of the Rothschild family in the late 19th century.

In 1938, soon after the Anschluss, or German annexation of Austria, the prayerbook was confiscated from Louis Nathaniel von Rothschild. After the end of World War II the new Austrian government used legislation forbidding the export of culturally significant works of art, partly to pressure the Rothschilds to donate a large number of works to Austrian museums. Under this coercion the prayerbook was "given" to the National Library. In exchange the family was allowed to export other works. In 1999, after international pressure was brought to bear over this coercion, the Austrian government returned the manuscript and other works of art to the Rothschild family. Soon thereafter the manuscript was offered for sale at Christie's in London, where it realized £8,580,000 (then $13,400,000).  When I wrote this database entry in November 2013 this remained the highest price ever paid for an illuminated manuscript.

"This Book of Hours is one of a group of spectacular manuscrits-de-luxe that was produced around 1490 to 1520 for an international clientele and members of the Habsburg court in the Netherlands. These vast undertakings were achieved by the efficient coordination of labor and collaboration of several artists and their workshops. It is closely related to a Book of Hours in the British Library, the Spinola Hours (now at the J. Paul Getty Museum) and the Grimani Breviary (now in Venice, at the Bibl. Marciana). With the Rothschild Prayerbook, these are the most impressive productions of the illuminator Gerard Horenbout, who became court painter to Margaret of Austria, Regent of the Netherlands, in 1515, before relocating to England to work for King Henry VIII. As well as painting and illuminating, he designed tapestries and stained glass.

"The illuminated openings, where a miniature faces a complementary full-page border, are some of Horenbout’s most exceptional creations. These scenes are thoughtfully devised and precisely observed, and they provide a fascinating record of liturgical practices of the day and they are some of the finest and most remarkable of all Flemish miniatures. The description of the fabrics of the vestments, the integration of figures in architectural space, and the extensive and atmospheric recession are evoked with a detailed delicacy and a bravura naturalism.

"One of the beguiling features of the Prayerbook is the wide variety in the decorative borders. Many of them, as well as further miniatures, recognizably belong to the repertoire of the illuminator long-known as the Master of the Older Prayerbook of Maximillian, who is now generally accepted as being Alexander Bening, friend of Hugo van der Goes and Joos van Ghent. Alexander’s son also contributed miniatures to the Prayerbook, including the Vision of St Bernard (illustrated top of page). The delicacy and elegance of this scene and the subtlety of handling in the modeling of the flesh and the description of fabric and form demonstrate why Simon went on to become the most celebrated illuminator of his day.

"Several miniatures were painted by the anonymous artist known as the Master of the Prayerbooks of c.1500. This illuminator is particularly valued for his delightful secular work, above all in the Roman de la Rose in the British Library. In the Rothschild Prayerbook he was responsible for some miniatures in the Office of the Virgin, including the Nativity on one of the most colorful and engaging openings where the borders around miniature and text are used to show other episodes from the Christmas story with the lively addition of the scene of joyful, dancing shepherds" (http://artdaily.com/news/65970/Christie-s-announces-centerpiece-of-the-Renaissance-Sale--The-Rothschild-Prayerbook#.UnUUYFCshcY[/).

On October 31, 2013 Christie's announced that it would once again auction the Rothschild Prayerbook on January 29, 2014 in New York. The presale estimate was $12 million to $18 million. They issued an unusually elaborate catalogue for the sale, providing an unusually detailed description of the manuscript. In January 2014 the catalogue could be read on Christie's website at this link. The manuscript was purchased by a private collector bidding over the phone for $13.3 million, just short of the price realized in 1999, but still a record for an illuminated manuscript. In April 2015 it was announced that the manuscript would be displayed at the National Library of Australia from May 22 to August 9, 2015, having been purchased in 2014 by Australian businessman Kerry Stokes.