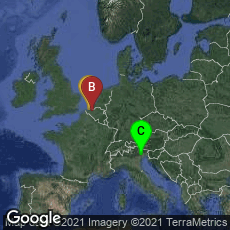 The Grimani Breviary: a Remarkable Artistic Collaboration between Simon Bening and Other Artists The Grimani Breviary (Ms Lat. I 99 = 2138, Biblioteca nazionale marciana), a key work in the final flowering of the Ghent-Bruges school of manuscript illumination, was produced in Ghent and Bruges from about 1515 to 1520.  By 1520 it was owned by Cardinal Domenico Grimani, Bishop of Ceneda, though it was possibly not originally commissioned by him.

The work was a remarkable artistic collaboration between a group of great masters, who worked under the supervision of Alexander Bening (Sanders Bening).  Other artists who contributed to the manuscript were Bening's son, Simon Bening, the Master of James IV of Scotland and Gerard David.

"Sanders Bening, who was in charge of the work on the Grimani Breviary, was in possession of almost all the drawings made for miniatures and decoration of the manuscripts made before 1484, and formerly attributed to a so-called Master of Mary of Burgundy. Previous generations of art historians have since the 1890's believed that the miniatures in the Grimani Breviary were direct copies after the originals, and several attempts have been made to explain how the various manuscripts could have been brought together and made available to the painters in the workshop. The registration of models used for the Grimani Breviary (and its immediate antecedants from c.1500-1514) has now become so comprehensive, that it would have required the presence in one location of more than six of the major works made before 1484, which is unthinkable. The continuous use of the original model-sheets can only be explained by their presence in the possession of Sanders Bening himself, who inherited many of them in 1482 from Hugo van der Goes and later left them to his son Simon at his death in 1519. Beside the original drawings did Sanders Bening apparently also make personal copies of many miniatures and kept them for his private use. This explains how not only the outlines of the figures and whole compositions could reappear more than 30 years later, but sometimes also be painted partly in the same colours as the first known version" (Drigsdahl, The Grimani Breviary and the Iconographical Heritage in Ghent, CHD Miscellanea 2002, accessed 11-02-2013).

The manuscript is preserved in the Biblioteca Marciana in Venice.