Detail of portrait of Philip the Good. Please click to view entire image. 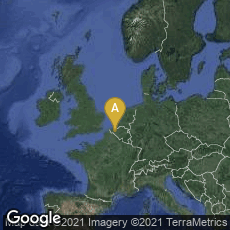 The Hours of Philip the Good, Illuminated with Miniatures Using the Grisaille Technique

Detail of page from Philip the Good's Book of Hours.  Please click to view entire image.

The Book of Hours of Philip the Good, Duke of Burgundy, was written between 1450 and 1460 by author, translator, manuscript illuminator, scribe and priest Jean Miélot (Miéllot), who served as the duke's secretary from 1449 to Philip's death in 1467. Many of the illuminations were created by Jean le Tavernier, a miniaturist from Oudenaarde, Belgium, who specialized in grisaille— a technique executed entirely in monochrome or near-monochrome, usually in shades of gray.  A number of these grisailles depict Philip the Good praying.

"For a long time it was thought that this book of hours from the KB [Koninklijke Bibliotheek, National Library of the Netherlands] collection is the one mentioned in an archival record from 1455, in which Philip the Good orders a payment to be made to Jean Le Tavernier for grisailles. However, recent research has shown that this reference actually is to another book of hours in Philips' library. The manuscript has, at a certain point, probably around 1500, been enlarged by adding new texts and images. The scribe and illuminator of the additions have done their utmost to make them as similar as possible to the existing ones. The book holds no less than 165 miniatures; 126 of them can be ascribed to Jean le Tavernier or an associate; the remaining 39 are by the anonymous illuminator of the additions, who is known as the 'Master of the Prayer Books of c.1500' " (http://www.kb.nl/en/digitized-books/book-of-hours-philip-of-burgundy/introduction, accessed 11-03-2013).

When I visited the website of the National Library of the Netherlands in November 2013 the site indicated that a digital facsimile of the Hours of Philip the Good was available; however, the link to the facsimile did not operate.