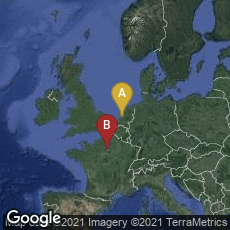 In 1684 French philosopher and encyclopedist Pierre Bayle initiated publication of Nouvelles de la république des lettres (News from the Republic of Letters). This journal, edited and largely written by Bayle from March 1684 through February 1687, was the first known book review journal. Though written in French, the work was published in Amsterdam to avoid censorship. After Bayle stepped down as editor the journal was continued

"... by Daniel de Larroque, Jean Barrin and Jean Le Cler through April 1689. Publication was suspended from then until January 1699 when it was resumed under the editorship of Jacques Bernard. He continued it through December 1710; it was then suspended until January 1716, when he resumed and continued until the final issue in June 1718" (Wikipedia article on Nouvelles de la république des lettres, accessed 11-06-2013).

Bayle's Nouvelles de la république des lettres is considered the first work to translate the Latin expression Respublica literaria into a modern language. The periodical had an association with the "Republic of Letters", a long-distance intellectual community and social network in the late 17th and 18th century in Europe and America.