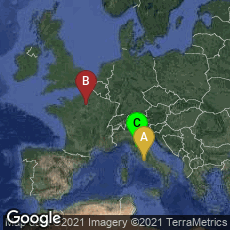 In 1584 Pope Gregory XIII founded a Maronite College in Rome to train European missionaries in various oriental languages, and to train oriental Christians in the languages of Europe. The Maronites translated books from Latin into Arabic and Syriac. To undertake the printing of Arabic and other oriental languages, Gregory appointed Cardinal Ferdinando de Medici, Grand Duke of Tuscany, director of what came to be called the Typographia Medicea or Medici Oriental Press. Medici placed Giovan Battista (Giambattista) Raimundi in charge of the press, within ten years they issued elegantly produced editions of Avicenna, Euclid and other works in Arabic. Sales and distribution of these books were, however, very limited:

Remarkably, as late as the 18th century, many of the books printed by Raimondi were still in the Palazzo Vecchio [Florence] stacked in wardrobes. An inventory taken at the time shows that 1,039 copies of the Arabic-Latin Gospels, 566 of the Arabic Gospels, 810 of the Avicenna, 1,967 of the Euclid, 1,129 of the Idrisi, still remained unsold, along with several other titles. But early in the 19th century the government sold the remaining books for a token sum to a bookseller who destroyed the bulk of them to increase the rarity and value of the remainder. The remaining type and matrices wound up in the Pitti Palace [Florence] where Napoleon was able to loot them when he conquered Italy. In 1808 Napoleon ordered the punches and matrices to be taken to Paris, where they were used to print Arabic proclamations for distribution in the Near East. Eight years later, after Napoleon's exile, the punches and matrices were brought back to Florence.