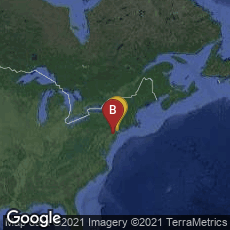 Logo of the U.S. Post Office Department until it was disbanded and restructured as the U.S. Postal Service in 1971.

"The service began on January 1, 1913. And begin it did. At the stroke of midnight Postmaster Edward M. Morgan in New York City and Postmaster General Hitchcock dropped packages addressed to each other into the mail, racing to be the first to use the service. They were not alone in looking to create a “first” out of the new service. These cups were the first objects officially mailed under the new service. But the first package to be delivered was 11 pounds of apples sent to New Jersey governor (and President-Elect) Woodrow Wilson. The Woodrow Wilson Club of Princeton deposited the apples at a local post office at precisely 12:01 a.m. By prearrangement, the carrier assigned to normally deliver the governor’s mail, David Gransom, received the parcel “before the cancelling ink was dry” and set off “driving furiously down the muddy street for the president elect’s home.” He delivered the apples to the waiting Wilson at 12:04 a.m. Wilson met Gransom at the door, signed for the package, and presented the carrier with the pencil" (http://www.npm.si.edu/parcelpost100/p3.html, accessed 11-07-2013).

"Parcel post service began on January 1, 1913 and was an instant success. During the first five days of service, 1,594 post offices reported handling over 4 million parcel post packages. The effect on the national economy was electric. Marketing through parcel post gave rise to great mail-order businesses. In addition, parcel post created an immediate demand for special packaging suitable for mailing the wide array of commodities considered deliverable under the system" (http://www.sil.si.edu/ondisplay/parcelpost/intro.htm, accessed 11-07-2013).