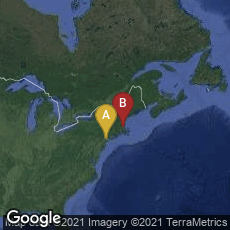 The First Parcel Express Agencies in the U.S. Transport by Horse or Stagecoach

"Express delivery in the early 19th century was almost all by horse, whether by stagecoach or riders. The first parcel express agency in the United States is generally considered to have been started by William Frederick Harnden (1812-1845), who in 1839 began regular trips between New York City and Boston, Massachusetts, as a courier transporting small parcels, currency and other valuables. Another, Wells Fargo & Co., was founded in 1853." The Railway Express Agency was a courier service that operated in the United States from 1918 to 1975.