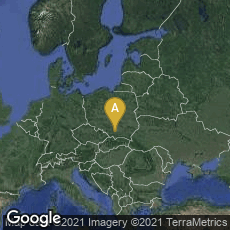 The famous heliocentric image of the universe in the original manuscript of Copernicus's De revolutionibus.

Virtually none of the original manuscripts of the greatest classics of the scientific revolution, including Vesalius, De humani corporis fabrica (1543) and Fuchs, De historia stirpium insignes (1542) have survived, except, remarkably, the original autograph manuscript for Copernicus, De revolutionibus (1543). One explanation for the loss of these manuscripts is that authors and printers typically did not retain manuscripts of texts after they were printed. Nevertheless, the library of Jagiellonian University in Cracow, where Copernicus received his education, preserves Copernicus's working manuscript, written by Copernicus from about 1520 to 1541. It remained in Copernicus's possession until his death on May 24, 1543.

"The autograph together with its new owner stayed for some time in Leipzig and in Cracow (about 1554 to 1574). Then it went to Kosice (Kaschau). There, after Rheticus' death, the new owner became his pupil and colleague, Valentine Otho (about 1545 - about 1603), who took it with him to Heidelberg. After Otho's death the autograph was bought by a professor from Heidelberg, Jakub Christmann (1554-1613). From professor's widow the manuscript was purchased on 17 January 1614 by the famous scholar and teacher from Moravia, Jan Amos Komensky (1592-1670). Maybe the autograph together with Komensky came again to Poland. It is not known what happened to it next. On 5 October 1667 the holdings of Otto von Nostitz (1608-1664) library, located in Jawor Slaski at that time were registered; the Copernicus' autograph is entered in this inventory. Otto left his signature on the flyleaf. The Nostitz library was then moved to Prague. The autograph had stayed in the aforesaid library until the end of the Second World War being used by the scholars for the research studies and publications. In 1945 the collection of Nostitz library in Prague was nationalized by the government of the contemporary Republic of Czechoslovakia and so the Copernicus manuscript became part of the collection of the National Museum Library in Prague. On 7 July 1956 the government of Czechoslovakia passed the priceless historical monument, on exchange, to the Polish nation and on 25 September 1956 it was given to Jagiellonian University in Cracow. Finally, the autograph was taken care of by the university in which Nicholas Copernicus was educated and from which he received scientific foundation for his memorable work"(http://www.bj.uj.edu.pl/bjmanus/revol/intro_e.html, accessed 11-12-2013).

This was what I knew in 2013. In 2019 I found the more nuanced The history of the original manuscript of De Revolutionibus by Teresa Borawska of Nicolaus Copernicus University in Toruń, Poland:

"It is not certain whether the manuscript of De revolutionibus, which was taken by Georg Joachim Rheticus to Nuremberg for printing in the autumn of 1541, was in the handwriting of the Frombork astronomer. It is equally difficult to determine who made the copy of Copernicus' work commissioned by Nicolaus Schönberg, Cardinal of Capua, at the end of 1536. It is certain, however, that both manuscripts were written under the supervision of the author who later carefully proofread them. A thorough analysis of the watermarks in the surviving autograph manuscript of De revolutionibus (called the author's 'fair copy' by Ludwik Antoni Birkenmajer) has proved that it was completed during Rheticus's stay in Warmia in 1540-1. Later slightly altered, and supplemented by a foreword and a letter dedicated to Pope Paul III, the manuscript remained in Copernicus' possession until his death. The autograph manuscript has 213 pages (with one blank), but the work published in the spring of 1543 in Nuremberg differed markedly. The original foreword written by Copernicus was replaced by one from Andreas Osiander reducing the theory to a mere hypothesis. A friend of the by now deceased author, Tiedemann Giese, immediately made an attempt to restore the original and must have sent the manuscript to Rheticus who was to oversee the publication of a new edition.

"Notwithstanding their sincere efforts, Copernicus' friends did not succeed in having his unaltered work printed. The unbound manuscript of De revolutionibus accompanied Rheticus until his death in Kosice (now in Slovakia) on 4 December 1574. Inherited by Rheticus' pupil and colleague Valentinus Otho (ca 1545 - ca 1602), who later became a professor in Heidelberg, the priceless manuscript of De revolutionibus(with its title page missing) was passed on to another Heidelberg professor, the orientalist Jakob Christmann (1554-1613) on 19 December 1603. Simon Petiscus, a mathematician used the manuscript for some time, and having bound it in boards in 1604, returned it to its owner in 1608. Upon Christmann's death his widow sold it on 17 January 1614 for a 'decent price' to the Heidelberg student Comenius (Jan Amos Komenski, 1592-1670) and it is quite likely that the famous educator took it to Poland where he stayed from 1626 to 1656.

"It is not certain how the manuscript turned up in the library of Otto von Nostitz (1608-65). The inventory (dated 5 October 1667) of the Nostitz family library, then stored in the castle of Jauer (Jawor Śląski) in Silesia, included Copernicus' autograph manuscript of De revolutionibus. Together with the entire library it was later moved to the Nostitz family palace in Prague, and it remained in their possession for nearly 300 years.

"Although the first printed mention of Copernicus' autograph manuscript appeared in 1788, in F. K. Hirsching's description of Prague's most valuable library items, it was not until 1840, when Karol Amerling publicized the electrifying news of its existence that Polish public opinion was stirred up. Extensively discussed in the press, the autograph manuscript of De revolutionibus aroused great interest among Copernican scholars and especially Jan Baranowski, the director of the Astronomical Observatory who was the first to publish a Polish translation in Warsaw in 1854. The edition included Copernicus' original foreword (then unknown) to Book One ignored by the Nuremberg publishers in 1543.

"The astronomers' manuscript was also used by Maximilian Curtze for the publication of the Toruń edition of 1873 and by F. & K. Zeller who produced the first facsimile in 1944 in Munich. In 1945 the Nostitz library was seized by the Czechoslovak government and the manuscript was moved to the Library of the National Museum in Prague. In 1953 it was lent to Poland and taken to Warsaw for the anniversary of Copernicus' birth, and on 5 July 1956 the government of Czechoslovakia presented this priceless and monumental work to the Polish nation. Soon afterwards, on 25 September 1956, the autograph manuscript of De revolutionibus was handed over to the Jagiellonian University Library in Kraków where it remains bearing the library number BJ 10 000."