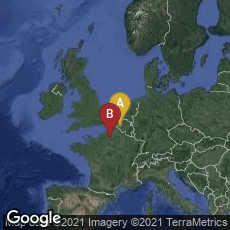 Speculum maius or Great Mirror, the Most Extensive Medieval Encyclopedia Vincent de Beauvais, from a fresco in the chaple of the church of San Nicolò, Treviso.

About 1250 Dominican friar Vincent de Beauvais (Vincent of Beauvais, Vincentius Bellovacensis or Vincentius Burgundus), whose name is associated with the Dominican monastery founded by Louis IX of France at Beauvais, France, compiled the Speculum maius, the largest medieval encyclopedia, and probably the largest reference work compiled in the west until 1600. A compendium of all medieval knowledge, the Speculum maius, or Great Mirror, consisted of three parts: the Speculum naturale, Speculum doctrinale and Speculum historiale. After the invention of printing all the editions included a fourth part, the Speculum morale, added in the 14th century and mainly compiled from the works of Thomas Aquinas, Stephen de Bourbon, and others. In this form the work contained eighty books and 9, 885 chapters, and extended to about 4.5 million words.

On November 15, 2013 I read medievalist Linda Fagin Davis's entry entitled "Monks and Minnesota" in her very distinctive Manuscript Road Trip blog. In that she reminded me about a two-volume medieval manuscript of Vincent's Speculum naturale which I sold to The Bakken Museum in Minneapolis during the 1970s. This was the first significant medieval manuscript that I ever handled. It was purchased by The Bakken because it contains some of the earliest recorded references to magnetism, as cited in Mottelay's Bibliographical History of Electricity And Magnetism (1922).

The Bakken's volumes were copied about 1280 by the monk Johannes de Resbais and his Cisterican brethren in the scriptorium of the Abbey of Cambron in Belgium. They were part of a seven volume set that eventually extended to about 1500 leaves (3000 pages) of vellum in small folio—an immense project of manuscript book production, and a very expensive set at the time for the cost of the vellum and the scriptorium labor. Linda Davis stated that "Johannes signed two of the volumes ('Johannes de Resbais wrote this; pray for him, beloved brothers, men of God'), and most include the fourteenth-century ex libris 'Liber sanctae mariae de camberonae” ('This book belongs to St. Mary of Cambron')." According to a catalogue of the Cambron Abbey library all seven volumes were still in the abbey as late as 1782. However, it is likely that they were dispersed in the closure of many religious establishments during the Napoleonic Wars (1800-1815).

"Research into the medieval reception of Vincent's Speculum has turned up only two extant copies of the whole work from a handful that were made in the Middle Ages. The Speculum circulated mostly in partial copies, three hundred of which survive, most of them focused on the Speculum historiale. But even the Speculum historiale survives in only thirty-seven complete copies. Given its massive size, the Speculum was prohibitively expensive to copy except partially. Printing was the key to its circulation either as complete parts during the incunabular period or as a complete set of four in 1591 and 1624. But Vincent of Beauvais was widely known and used as a source in shorter, more portable and affordable encyclopedic compilations. Among these the Libri de proprietatibus by Bartholomaeus Anglicus was widely copied in the Middle Ages and printed nine times down to 1491 and in English as late as 1582" (Blair, Too Much to Know: Managing Scholarly Information before the Modern Age [2010] 43-44, see also 41-45).

When I sold the manuscript to The Bakken I knew little about medieval manuscripts, and had only modest appreciation of the significance of this very large compendium. Nor was I aware that the Speculum naturale was rarer than the Speculum historiale, though it would stand to reason that a compilation on "science" might have had smaller circulation during the Middle Ages. The Wikipedia article on Vincent of Beauvais provides a good summary of the vast scope of the Speculum naturale, chiefly adapted from the 11th edition of the Encyclopedia Britannica (1911):

"The vast tome of the Speculum Naturale (Mirror of Nature), divided into thirty-two books and 3,718 chapters, is a summary of all of the science and natural history known to Western Europe towards the middle of the 13th century, a mosaic of quotations from Latin, Greek,Arabic, and even Hebrew authors, with the sources given. Vincent distinguishes, however, his own remarks.

The Speculum Naturale deals with its subjects in the order that they were created: it is essentially a gigantic commentary on Genesis 1. Thus, book i. opens with an account of the Trinity and its relation to creation; then follows a similar series of chapters about angels, their attributes, powers, orders, etc., down to such minute points such as their methods of communicating thought, on which matter the author decides, in his own person, that they have a kind of intelligible speech, and that with angels, to think and to speak are not the same process.

Book ii. treats of the created world, of light, color, the four elements, Lucifer and his fallen angels and the work of the first day.

Books iii. and iv. deal with the phenomena of the heavens and of time, which is measured by the motions of the heavenly bodies, with the sky and all its wonders, fire, rain, thunder, dew, winds, etc.

Books v.-xiv. treat of the sea and the dry land: the discourse of the seas, the ocean and the great rivers, agricultural operations, metals, precious stones, plants, herbs with their seeds, grains and juices, trees wild and cultivated, their fruits and their saps. Under each species, where possible, Vincent gives a chapter on its use in medicine, and he adopts for the most part an alphabetical arrangement. In book vi. c. 7, he incidentally discusses what would become of a stone if it were dropped down a hole, pierced right through the earth, and, curiously enough, decides that it would stay in the centre. In book ix., he gives an early instance of the use of the magnet in navigation.

Book xv. deals with astronomy: the moon, the stars, the zodiac, the sun, the planets, the seasons and the calendar.

Books xvi. and xvii. treat of fowls and fishes, mainly in alphabetical order and with reference to their medical qualities.

Books xviii.-xxii. deal in a similar way with domesticated and wild animals, including the dog, serpents, bees and insects; they also include a general treatise on animal physiology spread over books xxi.-xxii.

The remaining four books seem more or less supplementary; the last (xxxii.) is a summary of geography and history down to the year 1250, when the book seems to have been given to the world, perhaps along with the Speculum Historiale and possibly an earlier form of the Speculum Doctrinale."

In her blog Ms. Davis told an extraordinary story of the Vincent de Beauvais manuscript, and reminded me of the remarkable coincidence, which I vaguely remember understanding forty years ago, that the Bakken's manuscript belonged to the same medieval copy of Vincent's encyclopedia as two volumes of the Speculum historiale at the James Ford Bell Library at the University of Minnesota, also in Minneapolis. From her account of the history of the original set of seven volumes I quote:

"SH II/IV and SN I/II were acquired in 1836 by the great collector Sir Thomas Phillipps (1792 – 1872) in whose collection they were collectively known as MS 8753. Phillipps already owned SH I, having purchased it from the Abbey about a decade before; it was his MS 335. Did he know that the four volumes he bought in 1836 were sisters to the volume he already owned? Your guess is as good as mine.

"After Phillipps’ death in 1872, the five volumes in his collection were further divided. SH I was acquired by the Royal Library of Belgium in 1888 (it’s MS BR II.941). The four remaining Phillipps manuscripts were sold together at an 1897 auction as a single lot to dealer Bernard Quaritch.

"To recap, we have watched as two volumes (SH II and SH IV) made their way from Belgium to England to New York to Minnesota. But we’re not done yet.

"Hornby kept the remaining two manuscripts (SN I and II) until 1946, when he sold them for £100 to British collector John R. Abbey (1894-1969). In 1975, the volumes were sold at auction by Sotheby’s London to a dealer named Jeremy Norman, who bought them for £4000 (another whopping profit, this time for the Abbey estate) on behalf of…The Bakken! After a journey of hundreds of years and thousands of miles, four of the seven Cambron volumes have been reunited in Minneapolis, in libraries just a few miles apart."