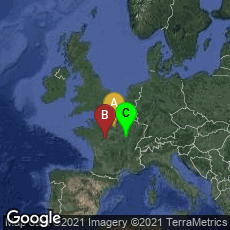 The first work on symbolic algebra.

According to all the histories of mathematics and science, in 1591 French lawyer, Conseil du Roi, and mathematician François Viète (Franciscus Vieta) published a pamphlet that was the earliest work on symbolic algebra. This pamphlet was issued under two different titles: a version issued separately entitled In artem analyticem isagoge (Introduction to the Analytic Art), and  a version published as a collective work containing various later pamphlets by Viète entitled Opus restitutae mathematicae analyseos, seu Algebra nova. Both versions have been proposed as the first edition of the work, and I have not seen a published study providing evidence of priority of one version or the other.

"Vieta’s greatest innovation in mathematics was the denoting of general or indefinite quantities by letters of the alphabet instead of abbreviations of words as used hitherto. It is true that arbitrary letters of the alphabet had been used to denote algebraic quantities in the thirteenth century by Jordanus Nemorarius and in the fifteenth and sixteenth centuries by Stifel and Regiomontanus in Germany and by Cardanus in Italy; but Vieta developed the idea systematically and made it an essential part of algebra. Known quantities were represented by consonants, unknown ones by vowels; squares, cubes, etc., were not represented by new letters but by adding the word quadratus, cubus, etc. Vieta also brought the + and — signs into general use, although they are found in some earlier German works and have been traced back to about 1480... This algebraic symbolism made possible the development of analysis, with its complicated processes, a fundamental element in modern mathematics” (Carter & Muir, Printing & the Mind of Man [1967] no. 103, citing the 1591 pamphlet version).

The title page of Viète's separately published pamphlet of 9 leaves issued from Tours by printer/bookseller, and Royal Printer for Mathematics Iametius Mettayer (Jamet Mettayer) stated in Latin "Seorsim excussa ab Opera restitutae Mathematica Analyseos, Seu, Algebrâ nova." (Separately issued from Collected Works on Mathematical Analysis or New Algebra). On the back of the title page of the pamphlet Viète had the printer list ten works that he planned to issue to complete the Algebrâ nova. Viète began the pamphlet with a florid dedication to his student Catherine de Parthenay, whom he characterized as a Melusine princess.

In 1593 Viète issued four more chapters of the work through the same printer at Tours, but not in the order listed on the verso of the title page of the Isagoge. They were:

And from Paris in 1600 he issued a sixth chapter:

The significance of most of these pamphlets is discussed in the article on Viète in the Dictionary of Scientific Biography.

Viète died in 1603 before he could have the final four chapters of the work published. After his death three more chapters were issued and one chapter was lost:

Since copies of the collective edition contain pamphlets issued between 1593 and 1600, it would be logical to presume that around 1600 Viète, or possibly his heirs, as the date of issue is uncertain and open to debate, probably issued a collected version of the six pamphlets listed above with title pages ranging in date from 1591 to 1600. Several copies of this collected version exist. According to Andrew Pressley, some, such as the Bodleian and Trinity College Cambridge copies, contain all six works; others contain varying numbers of the six. In the Opus restitutae version the title page of the Isagoge reads as a general title to the six pamphlets: Opus restitutae mathematicae analyseos, seu Algebra nova. On this title page Viète is characterized as "Fontenaeensis" (of Fontenay), and beneath the title the dedication of the whole work to Catherine de Parthenay is stated. However, the title page bears the same imprint and date as the separate pamphlet Isagoge version with the date of 1591.

Viète is known to have had all of his books and pamphlets issued privately at his own expense for distribution to a small number of people. Perhaps because of their rarity, to the best of my knowledge, the bibliographical history of most of them has never been studied thoroughly. Because of the close similarity of the two issues of the Isagoge, the statement on the title page of the separate issue,"Seorsim excussa ab Opera restitutae Mathematica Analyseos, Seu, Algebrâ nova", has been interpretted by some as meaning "separately issued from the Opera restitutae", or as a kind of offprint from the edition with that title. Without further research this may be a valid interpretation. However, in November 2013 it was possible to compare some of the pages from the Opera restitutae version of the Isagoge with the digital version of the separate printing available from the Bibliotheque nationale de France. This clearly demonstrated that the two versions were printed from different settings of type. Because of the time and expense of hand typesetting, and the difficulty of reproducing new technical mathematics by typesetters, if a separate printing or offprint of a larger work was called for we might assume that a sixteenth century printer would have printed the separate version from the same setting of type. Also, as a rule of thumb, until the 18th century few, if any printers could afford to leave type standing after a text was printed, so we may conclude that the two different printings from two different typesettings were done at different times.

The existence of two different settings of type would support the argument that the Opera restitutae version of the Isagoge is a reprint produced for issue with the five other available chapters of the Algebrâ nova that appeared between 1591 and 1600 when they were offered for sale as a collective work. This presumes that by the time of issue of the Opera restitutae version the supply of the original 1591 printing (the Isagoge version) was exhausted and the printer attempted to reproduce copies very closely, even to the point of reproducing the original uncorrected errata, though he used a different woodcut headpiece on p. 4 and there are numerous subtle typographical differences in the text, indicating a new setting of type. It seems strange that the printer would reprint the text without correcting the errata, but if the author was not available to verify the changes, or if the author was no longer alive, the printer might have felt the need to leave the text exactly as in the original printing.

The argument that the separate edition is an offprint from the version issued with the collected edition would appear to be contradicted that the fact that it is clearly a different printing. Furthermore, because the Opera restitutae must have been issued between 1593 and 1600, or later, based on the dates of the internal title pages, the notion that the Isagoge was first published in the Opera restitutae would suggest that Viète somehow waited until after 1593 and possibly as late as 1600 or later to issue the Isagoge. This would contradict all the historical accounts which indicate that the Isagoge was issued in 1591, as the introduction to a planned longer work. Nevertheless, this interpretation is based upon incomplete research and may not be viewed as definitive. In November 2013 it was unknown whether any of the other chapters were reprinted for the collected edition, or whether they represented copies that remained with the printer after their issue between 1593 and 1600.

I would welcome comments or additional information on this problem.