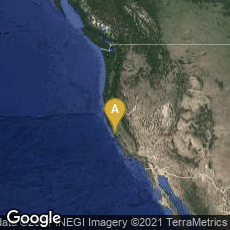 On November 25, 2013 Bonhams in New York sold the iconic lead statuette of the Maltese Falcon from the classic 1941 film noir, The Maltese Falcon, directed by John Huston and starring Humphrey Bogart, Mary Astor, Peter Lorre, and Sydney Greenstreet for $4,085,000. The film was set in San Francisco. According to Warner Brothers, the auctioned statuette was the only figurine of two made for the film that appeared in the movie.

"The statuette, which sold for $4,085,000 at Bonhams, has a Warner Brothers inventory number etched into its base and bears the name of the film.

"The figurine ranks as one of the most expensive pieces of film memorabilia ever sold at auction, beating the $2 million (£1.2m) paid for Judy Garland’s ruby slippers from The Wizard of Oz in 2012 and the £2.6 million ($4.1 m) paid for the Aston Martin driven by Sean Connery in Goldfinger in 2010.

"Dr Catherine Williamson, director of the entertainment memorabilia department at Bonhams, said: 'The spectacular price achieved reflects the statuette’s tremendous significance. The Maltese Falcon is arguably the most important movie prop ever, and is central to the history of cinema.'