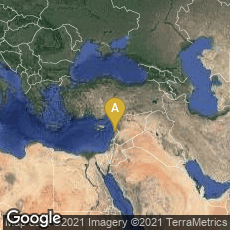 The Maronite Monastery of St. Anthony at Qozhaya Issues the Qozhaya Psalter, the First Book Printed in the Arab World The USEK Holy Spirit University of Kaslik copy of the Qozhaya Psalter (1610).

The first book printed in the Arab world was a bilingual Psalter in small folio of 260 pages which was printed in the Maronite Monastery of St. Anthony at Qozhaya in Northern Lebanon in 1610.  Sarkis el-Rizzi, a former pupil of the Maronite College in Rome, and Archbishop of Damascus, purchased a printing press from an embassy in Italy, which he installed in the Qozhaya Monastery, in the Qadisha Holy Valley, to begin, with a specialized team, printing the book of Psalms of David, the King and Prophet in Arabic using Syriac characters (Karshuni). To do so the Archbishop defied the firman of Sultan Bayezid II, who had forbidden all types of printing in his empire, and agreed to emulate the Jewish community of Istanbul, which had obtained permission from the Sublime Porte to print the Bible in 1515, translated by Saïd Fayyoumi into Arabic (transcribed in Hebrew characters).

"Besides the title-page, the little book contains an introduction by Sarkis al Rizzi, the Maronite Archibshop of Damascus, 151 psalms (the 150 canonical ones and one apocryphal), the ten Biblical odes (tasabih), the imprimatur by the Archbishop of Ihdin to whose diocese Quzhayya belonged, and a concluding colophon. The psalms are arranged in two columns, on the right is the text in Syriac and on the left in Arabic, but written in Syriac letters, the so-called Karshuni script. As the Arabic version is longer than the Syriac one the wish to keep both texts parallel caused the use of two different fonts; larger ones for Syriac and smaller ones for Arabic. Both sets of types are elegant and harmonious and are cast after a calligraphic model of high quality.

". . . . The lowest panel [of the title page] - again in Arabic (Karshuni) - gives information in the form of a colophon, on the place of printing, the printers, and the year of printing: 'In the venerated hermitage which is situated in the valley of Quzhayya on the blessed Mount Lebanon by the master Pasquale Eli and the humble Yusuf, the son of 'Amima from Karmsadda, called deacon, in the year 1610' " (Lehrstuhl für Türkische Sprache, Geschichte und Kultur Universität Bamberg, The Beginnings of Printing in the Near and Middle East: Jews, Christians and Muslims [2001] no. 3.)

Moukarzel, J (Ed.). The Book of the Psalms of David, King and Prophet: A facsimile of the Editio Princeps published in 1610 (Qozhaya - Lebanon). Kaslik: Holy Spirit University of Kaslik Press, 2016.