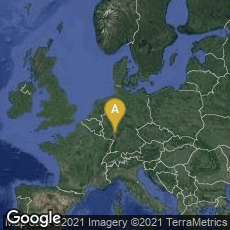 In 1617 German physician, alchemist, epigrammist and amateur composer Michael Maier published Atalanta Fugiens, an alchemical emblem book, in Oppenheim at the Press of engraver and publisher Johann Theodore de Bry. The work incorporated 50 emblems (images) by the German engraver Matthäus Merian, de Bry's son-in-law, each with a motto, epigram, and a three-part musical setting of the epigram, followed by an exposition of its meaning. The book extended the concept of an emblem book by incorporating 50 fugues, a technique of music composition in which a theme or themes are stated in two or more voices and repeated frequently at different pitches. The title of Maier's book, Atalanta Fugiens, or Atalanta Fleeing, alluding to the virgin huntress Atalanta of Greek mythology, who was unwilling to marry and was loved by the hero Meleager, contains a pun on the word fugue.

Early translations of Maier's work survived in manuscript: British Library MS. Sloane 3645, and Mellon MS. 48 at Yale. In December 2013 an English translation of Atalanta Fugiens reproducing the images and incorporating transcriptions from the Sloan MS, and some translations by H. M. de Jong, was available from the hermetic.com website at this link. At the time the same translation was also available from several other websites.