The exterior of the Denivosa Cave

Molar found in Denisova Cave of the Altay Mountains in Southern Siberia. 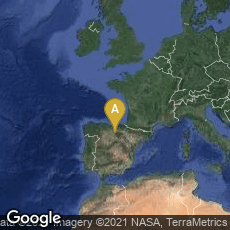 The Oldest Almost Complete Mitochondrial Genome Sequence of a Hominin On December 4, 2013 Matthias Meyer, Eduald Carbonell and Svante Pääbo and colleagues reported that the almost complete mitochondrial genome sequence of a hominin from Sima de los Huesos in Spain, dating back roughly 400,000 years, shows that it is closely related to the lineage leading to mitochonrial genomes of Denisovans, an eastern Eurasian sister group to Neanderthals.

"The fossil, a thigh bone found in Spain, had previously seemed to many experts to belong to a forerunner of Neanderthals. But its DNA tells a very different story. It most closely resembles DNA from an enigmatic lineage of humans known as Denisovans. Until now, Denisovans were known only from DNA retrieved from 80,000-year-old remains in Siberia, 4,000 miles east of where the new DNA was found.

"The mismatch between the anatomical and genetic evidence surprised the scientists, who are now rethinking human evolution over the past few hundred thousand years. It is possible, for example, that there are many extinct human populations that scientists have yet to discover. They might have interbred, swapping DNA. Scientists hope that further studies of extremely ancient human DNA will clarify the mystery" (http://www.nytimes.com/2013/12/05/science/at-400000-years-oldest-human-dna-yet-found-raises-new-mysteries.html?hp&_r=0, accessed 12-04-2013).

The Denisova Hominin, a Third Kind of Human
From Sibudu Cave, Probably the Earliest Sewing Needle, Made of Bone
The First Complete Neanderthal Genome Sequence