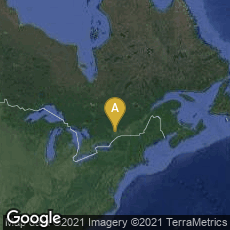 In 1962 English geographer Roger F. Tomlinson, then of Spartan Air Services, and IBM began the development of the Canada Geographic Information System (CGIS) for the Federal Department of Foresty and Rural Development in Ottawa, Ontario, Canada. This was the first true operational geographic information system (GIS). The system was used to store, analyze, and manipulate data collected for the Canada Land Inventory – to determine the land capability for rural Canada by mapping information about soils, agriculture, recreation, wildlife, waterfowl, forestry and land use at a scale of 1:50,000. A rating classification factor was also added to permit analysis.

"In 1960, Roger Tomlinson was working at an aerial survey company in Ottawa— Spartan Air Services. The company was focused on producing large-scale photogrammetric and geophysical maps. In the early 1960s, Tomlinson and the company were asked to produce a map for site-location analysis in an east African nation. Tomlinson immediately recognized that the new automated computer technologies might be applicable and even necessary to complete such a detail-oriented task more effectively and efficiently than humans. Eventually, Spartan met with IBM offices in Ottawa to begin developing a relationship to bridge the previous gap between geographic data and computer services. Tomlinson brought his geographic knowledge to the table as IBM brought computer programming and data management.

"The Canadian government and Tomlinson began working towards the development of a national program after a 1962 meeting between Tomlinson and Lee Pratt, head of the Canada Land Inventory (CLI). Pratt was charged with creation of maps covering the entire region of Canada's commercially productive areas by showing agriculture, forestry, wildlife, and recreation, all with the same classification schemes. Not only was the development of such maps a formidable task, but Pratt understood that computer automation may assist in the analytical processes as well. Tomlinson was the first to produce a technical feasibility study on whether computer mapping programs would be viable solution for the land-use inventory and management programs, such as CLI. He is also given credit for coining the term geographic information system and is recognized as the 'Modern Father of GIS' " (Wikipedia article on Canada Geographic Information System, accessed 12-07-2013).

"CGIS was an improvement over 'computer mapping' applications as it provided capabilities for overlay, measurement, and digitizing/scanning. It supported a national coordinate system that spanned the continent, coded lines as arcs having a true embedded topology and it stored the attribute and locational information in separate files. As a result of this, Tomlinson has become known as the "father of GIS", particularly for his use of overlays in promoting the spatial analysis of convergent geographic data" (Wikipedia article Geographic information sytem, accessed 12-07-2013).

In 1974 Tomlinson received a PhD from the University College London after writing a doctoral thesis entitled The application of electronic computing methods and techniques to the storage, compilation, and assessment of mapped data. In 1976 with H. W. Calkins and Duane F. Marble, he issued through UNESCO Press Computer Handling of Geographical Data: An Examination of Selected Geographic Information Systems. Natural Resources Research Ser. XIII.