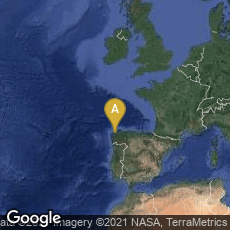 A: A Coruña, Galicia, Spain

The Kennicott Bible, the Most Lavishly Illuminated Hebrew Bible to Survive from Medieval Spain In the lengthy colophon at the end of the Hebrew illuminated manuscript known as the Kennicott Bible (Oxford, Bodleian Lib., MS. Kenn. 1) the scribe Moses Ibn Zabara stated that on Wednesday, the third day of the month of Aviv, in the year 5236 from the creation (24th July 1476), he finished the book in the town of La Coruña, in the province of Galicia, Spain. He stated that he was personally responsible for the entire text of all twenty-four books of the Bible: he copied the text, added the vocalization marks, wrote all the notes of the Massorah, and finally corrected it against a traditionally accurate Bible. He wrote the Bible for Isaac, son of Solomon di Braga.

Combining Islamic, Christian, and popular motifs, the Kennicott Bible is the mostly lavishly illuminated Hebrew Bible that survived from medieval Spain, before the expulsion of the Jews in 1492.  It contains the entire Tenakh (Old Testament) together with RaDaK’s (Rabbi David Kimchi) Sefer Mikhlol, a grammatical treatise on the Tenakh. Two hundred and thirty-eight of the 922 pages of the Bible are illuminated. There are 24 canonical book headings, 49 parashah headings structured with gold in different motifs featuring figures in many colors, 27 lavishly-illuminated arcaded pages framing the text of the Sefer Mikhlol, 9 fully illuminated carpet pages, and 150 psalm headings.

Remarkably, the manuscript contains an inscription identifying the artist who created the illuminations and minatures: Joseph ibn Hayyim. This is the only work associated with or signed by ibn Hayyim. Few Hebrew illuminators signed their work.

The history of manuscript from the expulsion of the Jews in 1492 to the eighteenth century remains a mystery. The Bible owes its name to the English Hebraist Benjamin Kennicott, who acquired it in the eighteenth century while Librarian of Radcliffe Camera, Oxford.  A digital facsimile is available from Digital Bodleian at this link.