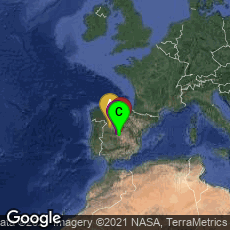 The Alba Bible, A Spectacular Record of Religious Tolerance Facsimile edition of the Alba Bible

After a series of anti-Semitic riots centered in Madrid, in 1422 Don Luis de Guzmán, grand master of the ancient Catholic military Order of Calatrava in Castile, believed that he might be able to build a bridge of understanding between Christians and Jews by commissioning a Castilian translation of the Old Testament from the original Hebrew, with a commentary by Jewish scholars interpreting the text. With this in mind, on April 5, 1422  Don Luis sent a letter to the rabbi Moses Arragel, who lived in the small town of Maqueda in Castile, asking the rabbi to undertake the project. In a letter dated April 14, 1422 the rabbi declined the invitation, believing that it was impossible for a Jew to translate or comment upon the Bible in a way that would satisfy a Catholic. However, Don Luis insisted, and he assigned Friar Arias de Enciena, custos of the Franciscans in Toledo, to convey to the rabbi his particular desires for the translation. How and why Rabbi Arragel agreed to undertake the project is unknown. The translation appeared in the illuminated Alba Bible, completed on June 2, 1430. At the beginning of the volume there are 25 pages of correspondence recorded between Rabbi Arragel and Don Luís Guzmán as well as between the rabbi and various Franciscans in Toledo involved in illustrating the translation, discussing matters related to the collaboration. This translation of the Old Testament into Castilian is one of several which were made at this time, and the cooperation of the Jewish rabbi with Catholic dignitaries in its production is one of the signs of the comparative religious tolerance then prevailing in Castile.

"The work comprises 513 pages and a rich collection of 334 miniatures that illustrate passages from the religious text. Although the text of the Alba Bible was the product of Rabbi Arragel, the elaborate artistic detail is wholly the product of Franciscans of Toledo.

"The Alba Bible contains a series of comments on the writing of both Jewish and Christian theologians, including Abraham ibn Ezra, Maimonides, Nahmanides, R. Joseph Kimhi, R. Asher ben Jehiel, Shlomo ben Aderet, R. Ya'acob and Nissim of Gerona. There is also commentary taken from rabbinic literary sources such as the Talmud and the Midrash." (Wikipedia article on Alba Bible, accessed 12-10-2013).

In 1992, on the 500th anniversary of the expulsion of the Jews from Spain, King Juan Carlos I revoked the order of the Expulsion of the Jews, and formally welcomed their descendants, and all Jews, back to Spain. That year Facsimile Editions of London issued a spectacular facsimile edition of the Alba Bible in an edition limited to 500 copies. The facsimile was commissioned by Mauricio Hatchwell Toledano, founder of the Fundación Amigos de Sefarad of Spain. In December 2013 copies remained available from the publisher, priced at $49,500. On the Facsimile Editions website there was a discussion of the history of the manuscript after it left the hands of Rabbi Arragel in 1430:

"After the manuscript left his hands on that Friday in 1430, it was apparently scrutinized by Franciscan censors in Toledo for a considerable time, probably until 1433. From there it was passed to the University of Salamanca, where the Dominican Juan de Çamora carried out a preliminary examination, and it was then submitted to a detailed examination at the Franciscan monastery in Toledo. This culminated in a public disputation at which theologians, knights, Jews and Moors argued their views. Following this, the manuscript disappeared until 1622, when it reached the great library of the Liria Palace, seat of the Grand Duke of Alba and Berwick, where it has been housed ever since."

expulsion of the Jews from Spain: