An illuminated leaf from the digital facsimile of the original manuscript provided by the British Library (Add. MS 11639). 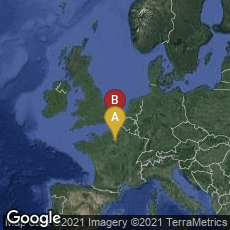 The "North French Hebrew Miscellany": More a Library than a Book A photograph of the facsimile edition of the North French Hebrew Miscellany. British Library Add. Ms. 11639.

The North French Hebrew Miscellany (or "French Miscellany" or "London Miscellany") (British Library Add. MS 11639) was written and signed by Binyamin Ha-Sofer (Benjamin the Scribe), probably in central France (Ile de France or Champagne) in the last quarter of the 13th century or the first quarter of the 14th century. Comprising 746 folios (1492 pages), it contains 84 different groups of texts, including hundreds of poems. It is exceptional both for its wide variety of texts and for the quality of its illuminations, which were added by Christian illuminators. Elements can be dated from contents, including Isaac ben Joseph of Corbeil's legal compendium the Sefer Mitzvot Katan  (a text known to have been finished in 1277), mentions of Yehiel of Paris, who died in 1286, as still alive, and "a table of moladot (lunation-commencements) for the period 1279/80 - 1295/95 (f. 444)."

The unusually long (1492-page) manuscript includes 49 full-page miniatures, mostly of Biblical subjects which were executed by 3-5 different Christian illuminators probably attached to workshops in St. Omer (Artois) and Paris. The manuscript has been extensively studied, and elements of its production are debated; the British Library catalogue entry includes an unusually long bibliography.  A digital facsimile is available from the British Library at this link.

"A deed of sale written in a German rabbinic hand shows that the manuscript was sold in 1431 by Samuel b. Hayyim to Abraham b. Moses of Coburg. The manuscript probably left France when its owners were banished during the wave of persecution in 1306. By 1479 it had reached Mestre in Italy and a little later was in Venice. In 1480 it was in Padua and in 1481 in Iesi, near Ancona.

"By the end of the fifteenth century it had found its way to north-eastern Italy and was rebound in Modena, near Bologna, in the sixteenth century. The magnificent calf binding that still survives bears the arms of the Rovigo family, one of whose most eminent members, Rabbi Abraham b. Michael, a kabbalist writer, may have owned the manuscript. In the seventeenth century it was examined by a censor and later came into the possession of the Barberini family whose famous golden-bee insignia can still be made out on the binding under a later decorative motif. It is unclear where the manuscript spent the intervening years.... Wherever it was, Giovanni Bernardo de Rossi was able to examine it in the last quarter of the eighteenth century and to include it in his seminal work, Variae lectionis veteris testamenti, in Parma in 1784. The manuscript finally came into the possession of the Reina Library of Milan and remained there until it was sold in 1839 by Maison Silvestre in Paris to Payne & Foss, and then on to the British Museum where it became Additional Manuscript 11639...." (Facsimile Editions description of their edition, accessed 12-10-2013).