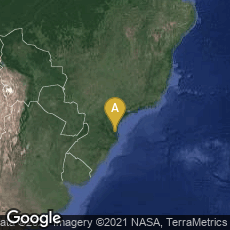 German physician and biologist Johann Friedrich Theodor Müller (better known as Fritz Müller) emigrated with his family to the German community of Blumenau, Santa Catarina, in southern Brazil. In 1878 he published "Ueber die Vortheile der Mimicry bei Schmetterlingen," Zool. Anz. 1 (1878) 54-55. In this paper Müller described what came to be known as "Müllerian mimicry." Batesian mimicry explained why an edible species would mimic an inedible one, but did not account for the superficial resemblances between two or more unpalatable species. Muller explained that a predator must learn which species are unpalatable, and the coloration of an unpalatable species serves as a warning coloration to predators. The selective advantage of Müllerian mimicry is that when two unpalatable species share similar warning colors fewer of both populations are lost because the warning colors are more quickly recognized by predators.