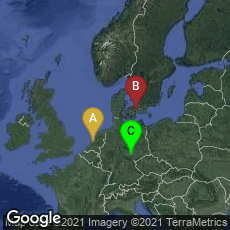 In 1889 Dutch botanist and geneticist Hugo de Vries published Intracellulare Pangenesis in Jena at the press of Gustav Fischer. In this brief book he postulated that inheritance of specific discrete traits was transmitted during cell division by particles which he called pangens (English: pangenes). These he described as the smallest particle representing one hereditary characteristic.