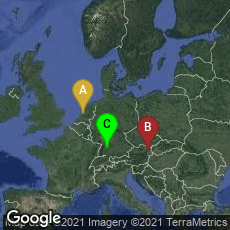 In 1900 three scientists independently rediscovered Mendel's laws or ratios, which had remained unnoticed by the scientific community since Mendel had originally published them in 1866. Both de Vries and Correns rediscovered the laws before reading Mendel's paper.

Dutch botanist and geneticist Hugo de Vries published his account of the rediscovery in two papers:

Reading de Vries's paper in German led German botanist and geneticist Carl Correns of the University of Tübingen to write his own paper, although Correns claimed he had previously and independently arrived at the same conclusions. Correns's paper was:

Along with de Vries and Correns, Tschermak brought Mendel's work into prominence and confirmed it, though it is thought that Tschermak may not have fully understood the Mendelian laws before he read Mendel's work.

♦ Rediscovery of Mendel's laws clarified inheritance, but Mendel worked with traits of whole organisms (plants).  How characteristics are sorted and combined on a cellular level where reproduction takes place became the research projects of 20th century scientists.