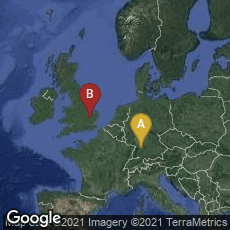 In 1908 mathematician G. H. Hardy of Cambridge University and general practitioner and obstetrician Wilhelm Weinberg of Stuttgart independently discovered what came to be known as the "Hardy-Weinberg equilibrium (Hardy–Weinberg principle). This

"states that allele and genotype frequencies in a population will remain constant from generation to generation in the absence of other evolutionary influences. These influences include non-random mating, mutation, selection, genetic drift, gene flow and meiotic drive. Because one or more of these influences are typically present in real populations, the Hardy–Weinberg principle describes an ideal condition against which the effects of these influences can be analyzed."

"Mendelian genetics were rediscovered in 1900. However, it remained somewhat controversial for several years as it was not then known how it could cause continuous characteristics. Udny Yule (1902) argued against Mendelism because he thought that dominant alleles would increase in the population. The American William E. Castle (1903) showed that without selection, the genotype frequencies would remain stable. Karl Pearson (1903) found one equilibrium position with values of p = q = 0.5. Reginald Punnett, unable to counter Yule's point, introduced the problem to G. H. Hardy, a British mathematician, with whom he played cricket. Hardy was a pure mathematician and held applied mathematics in some contempt; his view of biologists' use of mathematics comes across in his 1908 paper where he describes this as "very simple".

To the Editor of Science: I am reluctant to intrude in a discussion concerning matters of which I have no expert knowledge, and I should have expected the very simple point which I wish to make to have been familiar to biologists. However, some remarks of Mr. Udny Yule, to which Mr. R. C. Punnett has called my attention, suggest that it may still be worth making...

Suppose that Aa is a pair of Mendelian characters, A being dominant, and that in any given generation the number of pure dominants (AA), heterozygotes (Aa), and pure recessives (aa) are as p:2q:r. Finally, suppose that the numbers are fairly large, so that mating may be regarded as random, that the sexes are evenly distributed among the three varieties, and that all are equally fertile. A little mathematics of the multiplication-table type is enough to show that in the next generation the numbers will be as (p+q)2:2(p+q)(q+r):(q+r)2, or as p1:2q1:r1, say.

The interesting question is — in what circumstances will this distribution be the same as that in the generation before? It is easy to see that the condition for this is q2 = pr. And since q12 = p1r1, whatever the values of p, q, and r may be, the distribution will in any case continue unchanged after the second generation

"The principle was thus known as Hardy's law in the English-speaking world until 1943, when Curt Stern pointed out that it had first been formulated independently in 1908 by the German physician Wilhelm Weinberg. William Castle in 1903 also derived the ratios for the special case of equal allele frequencies, and it is sometimes (but rarely) called the Hardy–Weinberg–Castle Law" (Wikipedia article on Hardy-Weinberg principle, accessed 12-16-2013).