1784-1791, Mozart's catalogue of his own works, which he kept from 1784 to just before his death in 1791. Cover label (f. i) and contents entirely in Mozart’s hand. Written in ink. Signed ‘Wolfgang Amadé Mozart [paraph]’ on the cover label (f. i). Contents arranged with dates and description of each work on versos (the left page) Zweig MS 63. British Library. 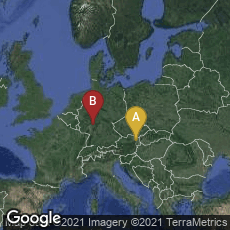 Mozart's Autograph Catalogue of His Own Compositions, and its First Printed Editions The 1805 lithographed edition of Mozart's catalogue, from the copy in Harvard University Libraries.

From February 1784 to November 1791, just before his death, Austrian composer Wolfgang Amadeus Mozart kept an autograph manuscript catalogue of his own compositions, arranged with dates and description of each work on the left page of each opening (verso), and musical incipits opposite on the right page of each opening (recto). The first entry, dated February 9, 1784, is for the Piano Concerto in E flat (K449), the last (ff. 28v-29r), is dated November 15, 1791, for the Masonic cantata ‘Laut verkünde unsre Freude’ (K623).

In 1800 composer and music publisher Johann Anton André of Offenbach acquired Mozart's catalogue from Mozart's widow Constanze, along with other Mozart manuscripts that she inherited. Creating a published record of Mozart’s works was a priority for both Constanze and André, and soon after acquiring the manuscripts, André used the Verzeichnüss as the basis for a thematic catalogue published in 1805 entitled Thematisches Verzeichniss sämmtlicher Kompositionen von W.A. Mozart, so wie er solches vom 9ten Februar 1784 an, bis zum 15ten November 1791 eigenhändig niedergeschrieben hat nach dem Original-Manuscripte herausgegeben von A. André 1805. Andre's edition—the earliest surviving lithographed book— reproduced the format and order of Mozart’s catalogue while paraphrasing Mozart’s descriptions in German and French. On the verso of each opening, the compositions (usually five per page) were listed by date, title, and instrumentation, while the corresponding musical incipits appeared on the recto.

Mozart's composition catalogue is preserved in the British Library as Zweig MS 63. As befitting Mozart, the manuscript has been intensively studied by generations of scholars, and both the British Library's description of the manuscript, and the bibliography of publications concerning it is unusually exensive. Its ownership history is also is well-documented. The manuscript remained in the André family until it was offered for sale at the auction of manuscripts of the heirs of André in Berlin by L. Liepmannssohn auctioneers, sale 55, October 12, 1929, lot no. 17, where it was unsold. Later it was purchased from Liepmannssohn for Austrian novelist, playwright, journalist, biographer and autograph manuscript collector Stefan Zweig by Berlin book & manuscript dealer Paul Graupe  and purchased by Zweig through H. Eisemann in 1935. After Zweig's death his heirs put the manuscript on loan to British Library, and continued to add to Zweig's collection. Then, in 1986 they donated his entire collection of literary, historical and musical autograph collections to the British Library, which summarized its significance as follows:

"Zweig's collection has been called one of the world's greatest collections of autograph manuscripts. Among the music manuscripts are autograph scores of Bach, Haydn, Mozart, Beethoven and Schubert. Composers in the Zweig Collection who were previously poorly represented in manuscript at the British Library, or not represented at all, include Schütz, Gluck, Wagner, Mahler, Debussy, Schoenberg, Ravel, Webern, and Berg."