A map of the Altai Mountain range. 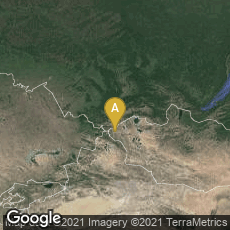 On December 18, 2013 Svante Pääbo and colleagues from the Department of Evolutionary Genetics, Max Planck Institute for Evolutionary Anthropology in Leipzig, together with scientists from research centers in America, China, Russia and other countries, announced that they sequenced the complete genome of a 130,000 year old Neanderthal woman from a single toe found in a Siberian cave in the Altai Mountains. There DNA evidence has been unusually well preserved because of very low average temperature. Comparison of this complete Neanderthal genome with those of 25 modern humans enabled the authors to compile a list of mutations that evolved in modern humans after their ancestors branched off from Neanderthals some 600,000 years ago. "The list of modern human things is quite short," said John Hawks, a paleoanthropologist at the University of Wisconsin who was not involved in the study. The paper, published in the journal Nature, was entitled "The complete genome sequence of a Neanderthal from the Altai Mountains"  doi:10.1038/nature12886.

The abstract read as follows:

"We present a high-quality genome sequence of a Neanderthal woman from Siberia. We show that her parents were related at the level of half-siblings and that mating among close relatives was common among her recent ancestors. We also sequenced the genome of a Neanderthal from the Caucasus to low coverage. An analysis of the relationships and population history of available archaic genomes and 25 present-day human genomes shows that several gene flow events occurred among Neanderthals, Denisovans and early modern humans, possibly including gene flow into Denisovans from an unknown archaic group. Thus, interbreeding, albeit of low magnitude, occurred among many hominin groups in the Late Pleistocene. In addition, the high-quality Neanderthal genome allows us to establish a definitive list of substitutions that became fixed in modern humans after their separation from the ancestors of Neanderthals and Denisovans."