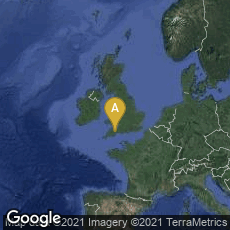 A tenth-century anthology of Anglo-Saxon poetry, the Exeter Book, (Exeter Cathedral Library MS 3501, Codex Exoniensis) is one of the four major Anglo-Saxon literature codices, along with the Vercelli Book, the Nowell Codex and the Junius manuscript. The largest surviving original collection of Old English literature, containing approximately one-sixth of the surviving corpus of Old English verse, it is believed originally to have contained 131 leaves, of which eight original leaves were lost at some point, and replaced with other leaves.

"The precise date when the Exeter Book was compiled and written down is unknown, but it is rightly acknowledged to be one of the great works of the English Benedictine revival of the tenth century, and proposed dates for it range from 960 to 990. This period saw a rise in monastic activity and productivity under the renewed influence of Benedictine principles and standards. At the opening of the period, Dunstan's importance to the Church and to the English kingdom was established, culminating in his appointment to the Archbishopric at Canterbury under Edgar and leading to the monastic reformation by which this era was characterised. Dunstan died in 998, and by the period's close, England under Æthelred faced an increasingly determined Scandinavian incursion, to which it would eventually succumb.

"The Exeter Book's heritage becomes traceable from 1072, when Leofric, Bishop at Exeter, died. Among the treasures which he is recorded to have bestowed in his Will upon the then-impoverished monastery, is one famously described as 'mycel Englisc boc be gehwilcum þingum on leoð-wisan geworht' (i.e., 'a large English book of poetic works about all sorts of things'). This book has been widely assumed to be the Exeter Codex as it survives today.

"Some marginalia were added to the manuscript by Laurence Nowell in the sixteenth century and George Hickes in the seventeenth" (Wikipedia article on Exeter book, accessed 12-24-2013).

During the bishopric of Leofric, the cathedral library at Exeter was the fourth largest in England. Along with the Exeter Book, Leofric bequeathed sixty-five other manuscripts and books to the cathedral—an exceptionally large personal library for the time. Of those, about twenty remain extant.

"Three versions of the donation list drawn up by Leofric survive, which is one of the earliest surviving cathedral library catalogues. The list consists of 31 books used to conduct cathedral services, 24 other ecclesiastical works, and 11 works that were secular. This last group included philosophical works as well as poetry.... Besides the Exeter Book and the Leofric Missal, Leofric's own copy of the Rule of Chrodegang also survives, although it is no longer at Exeter. Now it is at Cambridge University, where it is Corpus Christi College MS 191. Another surviving manuscript from Leofric's collection is a Gospel book written in Latin now in the Bodleian Library, which was probably acquired by Leofric while he was on the continent, as the manuscript was originally written for a Breton monastery" (Wikipedia article on Leofric (bishop), accessed 12-24-2013).