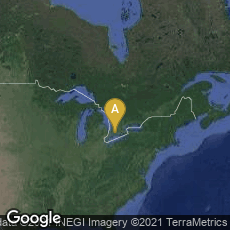 In 1949 Canadian physician and medical researcher Murray L. Barr and his graduate student Edwart G. Bertram, working at the University of Western Ontario, showed that it is possible to determine the genetic sex of an individual according to whether there is a chromatin mass present on the inner surface of the nuclear membraine of cells with resting or intermittent nuclei (sex chromatin). In Barr's words:

"After several years spent on several research projects, all of which were in the field of neurocytology, i.e. the cells of the nervous system, I decided in 1948 to start a project that was designed to learn whether heightened nerve cell activity produced any structural changes in these cells. The experiment required stimulation of a nerve in cats, during which they were anaesthetized. The animals were anaesthetized again when the portion of the brain containing the stimulated cells was removed for microscopic examination. The cats were therefore subjected to no discomfort or pain.

Just after the details of the experiment had been worked out, Ewart G. Bertram applied for a position as a graduate student leading to the Master of Science degree and we worked together on the project.... Examination of the sections showed that the nerve cell nuclei contained an especially prominent mass of chromatin, i.e. the particulate matter derived from the chromosomes, these being the nuclear components that bear the genes. However, it was soon found that the special mass of chromatin was present in the cell nuclei of some animals and not of others. Checking the experimental records showed that the mass was present in the nuclei of female cats and absent from those of male cats. It was therefore named the sex chromatin because of the sex difference and this discovery was the beginning of the new science of human cytogenetics, i.e. the relation of chromosome abnormalities to developmental defects. Methods of testing suitable for use in humans were devised and before long, it was shown that numerical or structural abnormalities of the chromosome were responsible for a number of developmental defects. The best known are Turner's syndrome in females, Klinefelter's syndrome in males and Down's syndrome in persons of both sexes. The use of testing for chromosomal abnormalities is of particular interest to paediatricians, endocrinologists and psychiatrists, especially those who are involved with the mentally retarded."