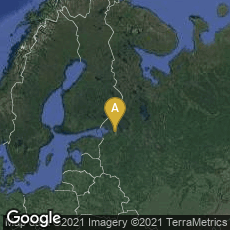 In 1933 Russian educator and telecommunications engineer Petr Petrovich Troyanskii (Petr Petrovic Trojanskij) of St. Petersburg received a patent for a mechanical "translating machine": “a machine for selecting and typing words when translating from one language into another or several others simultaneously.” Troyanskii described an automatic bilingual dictionary, a scheme for coding interlingual grammatical roles (based on Esperanto) and an outline of how analysis and synthesis might work. However, the Russian patent office failed to understand his purposes and classified the patent as a novel method of typesetting. Troyanskii's ideas were unknown in the west until they were published in Russian during the 1950s.

"The patent submitted on 5 September 1933 describes a machine consisting of 'a smooth sloping desk, over which moving easily and freely in different directions is a belt provided with perforations which position the belt in front of an aperture' ... This broad belt was a large dictionary, with entries in six languages in parallel columns. The operator located a word of the source language and moved the belt to display in the aperture the corresponding word of the target language. The operator would then type in a code indicating the grammatical category or role of the word in question – codes that Trojanskij referred to as ‘signs for logical parsing’ – and the combination of target word and code were then photographed onto a tape. Then the next source word would be located and ‘translated’ in the same way. From a tape of the target language words in sequence, a typist would then produce a ‘coherent text’ for a reviser to substitute the correct morphological forms for each word based on the assigned codes. As a final stage a ‘literary editor’ would produce the final target text. Unlike the operator and the reviser, who needed to know only their own languages (those of the source and the target respectively), the editor would need to know both languages in order, in Trojanskij’s words, 'to extract the meaning of the translation, to choose synonyms, to polish the unevenness, i.e. to do general literary finishing' " (John Hutchins, Two precursors of machine translation: Artsrouni and Trojanskij [2004], accessed 12-28-2013.)