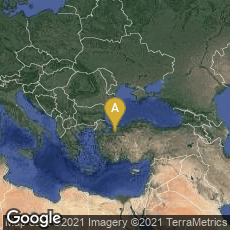 The First Ecumenical Council of Christianity Image Source: en.wikipedia.org
A sixteenth century fresco of the Council of Nicea, Sistine Chapel, The Vatican.

The year after he came Emperor of the entire Roman Empire, Constantine convened the First Council of Nicaea  (Νίκαια /'ni:kaɪja/ Turkish: Iznik), a council of Christian bishops in Nicaea in Bithynia. This council, presided over by Pope Alexander of Alexandria and Constantine, was the first effort to attain consensus in the church through an assembly representing all of Christendom.

"Its main accomplishments were settlement of the Christological issue of the nature of the Son of God and his relationship to God the Father, the construction of the first part of the Creed of Nicaea, establishing uniform observance of the date of Easter, and promulgation of early canon law" (Wikipedia article on Council of Nicaea, accessed 12-29-2013).